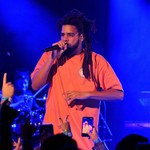 “One time for my L.A. sisters, one time for my L.A. h–s,” J. Cole’s voice rumbled during his performance of “No Role Modelz” in the intimate 500-capacity Roxy Theater in West Hollywood, Calif., on Saturday night. But the Fayetteville, N.C., rapper did it two times for his L.A. fans last week, as Saturday’s performance, which was part of SiriusXM and Pandora’s Small Stage Series, came two nights after his The Off-Season Tour stop at Inglewood’s Forum arena.

The coziness of Cole’s concert was all-too palpable for the artist himself, sweating through his orange tee but breezing through his decade-long discography and assuring concertgoers not to sweat it if they didn’t know his tracks bar-for-bar (while warning them not to fake it by mouthing his lyrics). The 36-year-old rhapsodist then broke down the significance of having a catalog before reliving his own, which includes six Billboard 200 No. 1 albums.

While his Dreamville labelmates Bas, Ari Lennox, Earthgang, J.I.D, Cozz and Lute & Omen reunited for the first time since the 2019 inaugural Dreamville Festival at Colorado’s Red Rocks Park and Amphitheatre, their label boss brought the house down on his own, proving that even without his home team, his pen game would carry him to victory.

For Cole fans unable to attend his exclusive SiriusXM and Pandora’s Small Stages set, they can catch the action on SiriusXM’s Hip Hop Nation (channel 44) and on the SXM app Tuesday, Oct. 26, at 6 p.m. ET.