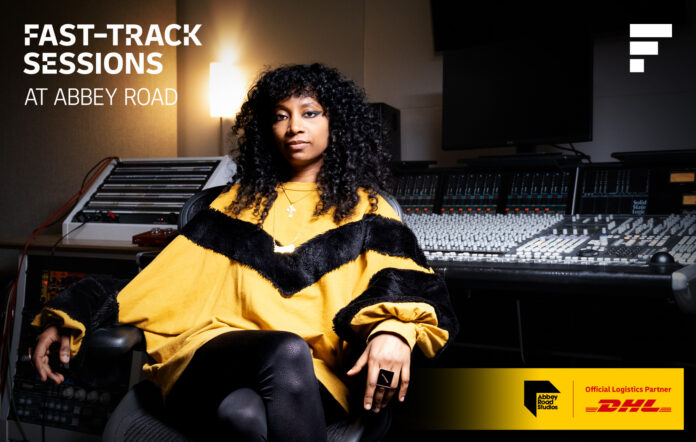 DHL have announced the three artists for the FAST-TRACK Sessions at Abbey Road Studios talent search.

Following hundreds of entries, Rosie Charles, Mo Othman and Kohzee were selected by the judging panel that consisted of record producer Hannah V and Thomas Smith, NME’s Commissioning Editor (New Music). Entrants were asked to send in a one-minute clip of them performing a piece of original music for consideration.

The initiative seeks to unearth and support grassroots music talent by providing access to a professional recording experience and music industry experts. The three entrants were selected to record at the iconic Abbey Road Studios in London, where The Beatles, Amy Winehouse, Frank Ocean and more all recorded some of their finest work.

All three headed to Abbey Road Studios to work with Hannah V on a diverse selection of tracks and gained crucial industry experiences on their individual two-day sessions.

Speaking to NME, Rosie Charles, a singer-songwriter from Manchester, said that heading into the iconic Abbey Road Studios was a huge moment for her. “I felt complete euphoria when I walked in,” she told NME. “There is so much history within those walls and I felt honoured to have been chosen to make music there. The best moment for me was when Noel Gallagher popped into my studio session and listened to my track. He is a huge inspiration to me and was so lovely. He said he really liked the song and I’m still buzzing about it!”

With Hannah V, Charles worked on a song called ‘Bus Stop Lover’, a song about a “gorgeous boy she saw at the bus stop” she wrote when she was 16. “I had tried to produce the song myself a few times but it never felt right and I knew it could be better,” she says. “Hannah helped elevate the track in ways I could never have imagined and I am so grateful to her. She really pushed my vocal ability and helped me create something that I am really proud of. It’s very inspiring for me to see such an amazing female producer doing her thing.”

Mo Othman, pianist and singer from south Manchester, also praised Hannah V’s production approach on two of his tracks: ‘Tears’ and ‘Giant’. “Hannah V brought songs I wrote in my house to life,” he says. “I watched her use her money makers on the piano and couldn’t believe it. She taught me so much in such a small amount of time: from perfecting adlibs to properly structuring my lyrics to improving the quality of my music. She has inspired me to do so much in music.”

Heading into the studio and meeting music industry professionals was a huge takeaway for Othman. “When first I arrived at Abbey Road Studios, I was overwhelmed. But speaking to Hannah V and Jay Picasso [Artist Relationship Manager at ARS] in the canteen just calmed me down. She’s such a legend with a beautiful soul; Jay just threw so many gems at me and taught me things about the industry that I never knew. The DHL FAST-TRACK initiative has allowed me to live and breathe the life of an artist and I absolutely loved it.”

For Kohzee, the London-based trio of Zirak Khan, Charlie Higgins, Oscar Black, taking their “homegrown organic beets” into a studio has raised the bar for their music: the band worked on ‘Sand’ in the studio, one of their first completed composition “That ceiling level of quality has been raised by a thousand times,” they tell NME. “Oscar was about to record his vocals in the booth for the first time when he saw through the soundproof glass that we were all screaming and laughing because of something Hannah had just said. He looked confused and asked what was happening. Hannah pressed down the talk back function and we told him that the mic he was about to sing into was the same mic used on The Beatles’ ‘Abbey Road’. His face was absolutely priceless: just shock and absolute disbelief.”

Being a part of the DHL FAST-TRACK Sessions initiative, they say, has helped them reevaluate how they work as a collective. “Hannah has shown us that the process can be methodical without being rigid: Don’t be so protective about every idea,” they say. “She listened to each of us and took her time to understand our vision and the picture that we were trying to paint with this song. And then she magically brought it to life. She really brought out the best in us and made us feel so comfortable.”

Find out more at inmotion.dhl/sessions

The post Inside Abbey Road Studios with the winners of DHL’s FAST-TRACK Sessions initiative appeared first on NME.