HomeMusicIn Her Next Chapter, Baby Tate is Aiming for New Heights
Music

In Her Next Chapter, Baby Tate is Aiming for New Heights 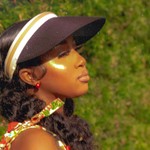 Though just 25 years old, Tate Sequoya Farris—formerly known as Yung Baby Tate, a moniker she’s now shortened to Baby Tate—has already established herself as one of the most vibrant, versatile new voices in music. The Decatur, Georgia native (and daughter of the renowned soul singer Dionne Farris), immersed herself in music from a young age. A voracious appetite for new styles and sounds has given her records, which are largely self-produced, an extraordinarily diverse palette. Within that expansive framework, the rapper and singer has continued to hone a voice that is all her own. “I don’t like doing things that are the same,” Tate says. “I don’t like to make the same songs twice. I’m always looking for something that makes me feel different than I’ve ever felt before.”

After a string of EPs and a debut album—the thoughtful and provocative Girls—Tate has aligned herself with Warner Records, where she is set to embark on a new phase in her career. Aside from the name change, Tate talks about her new songs as being bolder and more revelatory than ever before. This new era kicks off in earnest today with the release of “Petty,” her irrepressible new single.

The following interview was edited for length and clarity:

Billboard: You’ve already put out six different EPs in your career. What about that shorter format appeals to you?

Baby Tate: Number one, peoples’ attention span is so short these days. Up into this point, I [felt] like I just wasn’t at a place where I could put out a 20-song project and [be sure] people are staying all the way to the end. It also allows me to create a more focused project because I do have such a wide array of genres and even vocal styles. Focusing on an EP gives me a target to hit, and it’s a small target.

Billboard: When you did put out a longer record, Girls, it delved into the many different facets of being, and being perceived as, a woman. What did you learn about yourself while writing that album?

BT: [The time I was recording Girls] was also the first time that I toured. I was able to see how my music affected people a bit more in person. I think I just learned to be more honest in my music and more vulnerable. I think that with Girls, because I was so honest and vulnerable, I was able to touch a lot of people in ways that I wasn’t with my previous music.

Billboard: You also own your sexuality on records in a way women are often discouraged from. What gave you the confidence to open up more in that way?

BT: I’m not sure. I think I was just taking a risk. With Girls, the project as a whole was very…I guess you could say experimental, but also exploratory. It was like, “Let’s explore all of these different facets of not only women but of myself,” and I had to go deep because that’s the whole point of this project. Women—we’re not just this; we’re all of these things. It was like, “I got to dive deep.”

Billboard: You’re entering a new phase of your career; how did you decide on the song that would reintroduce you?

BT: Honestly, it happened because of Twitter. We had a completely different plan for what song to come out with first with Warner, [but] I dropped a snippet of “Pedi,” and people just loved it so much. I’m like, “You guys, I think we should drop this song. I think that this is just a stronger introduction.”

Billboard: What made you want to drop the ‘Yung’ from your name?

BT: So many reasons. One, people always misspell it. It’s Y-U! [laughs]. But also, I feel like it represented an era that I don’t feel I’m in anymore. If you didn’t know who Yung Baby Tate [was], you would think, “Oh, this is some SoundCloud rapper. We don’t even know if it’s a woman, a man—we have no clue.” And I’m [approaching] a point in my life where I don’t want to be represented in a small way. I’m pushing 30, so I’m not necessarily young anymore, but I will always be my mom’s baby. “Baby Tate,” for me, is short, sweet, to the point. “Yung,” for me, it just gives ‘rapper.’ I think ‘Baby Tate’ represents star—all music genre star. It’s just taking a leap into a new place, a new frontier, and it’s Baby Tate.

Billboard: Your team at Warner is largely comprised of Black women [ VP of A&R Malita Rice, VP of Marketing Shawnae Corbett, and Aishah White, SVP of Media & Strategic Development]. What does it mean to have them in your corner as you try to navigate the industry?

BT: It means so much to me. I just started working with Warner, but I felt so [immediately] supported in my ideas, my beliefs, and my decisions. Not as in, “Oh, that’s cool, whatever,” but like, “We’re really going to bat for this. Absolutely, girl—let’s represent what you want to represent.”

That was something that definitely drew me to this team: having strong, powerful Black women who will go to bat for me and make things happen in my career. I want to see myself in my team.

Billboard: I know you’ve got some festival performances and other spot dates coming up soon. What’s your live show like these days—how is it evolving?

BT: Every show, I critique myself. I’m like, “OK, I need to do this differently. I need to change this part of the set.” And every audience is different. Last night, I just performed at the freaking Apollo, which was crazy. I was so nervous. I was literally shaking in my boots. My heart was beating out of my chest, but it was a really great show. I had two dancers with me and my DJ, and we freaking killed it. The entire theater was [in an uproar], and it was amazing. But all these different shows require different things. Thinking about them [in terms of] who’s going to be in this audience, but then also wanting to be conscious of myself and presenting who I am, regardless of who’s out there. It’s like a seesaw, teeter-totter type of thing that we do. But yeah, I’m just getting better and better, and killing it every time, period.