HomeMusic‘Hocus Pocus’ Music Producer on Why ‘I Put a Spell on You’...
Music

‘Hocus Pocus’ Music Producer on Why ‘I Put a Spell on You’ Still Enchants, Almost 30 Halloweens Later 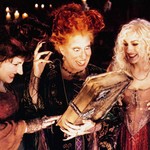 On the latest Billboard Pop Shop Podcast, we’ve got a Halloween treat for you! We find out the story behind one of modern film’s most iconic music sequences: Hocus Pocus’ “I Put a Spell on You,” as performed by Bette Midler.

Marc Shaiman, who produced and arranged the song for the movie, joins the Pop Shop to discuss how the song came together — and why the performance and film continues to enchant viewers so many years later.

“I Put a Spell on You” was first released in 1956 by Screamin’ Jay Hawkins, who also wrote the track. It has since been covered by many artists, including Nina Simone, Creedence Clearwater Revival, Annie Lennox and, of course, by Midler and her onscreen Sanderson Sisters in Hocus Pocus, played by Sarah Jessica Parker and Kathy Najimy in the 1993 film.

“The original recording… is a classic,” Shaiman tells the Pop Shop (listen below), “but it really only has like three lines of lyrics in it. So we just sat at the piano and we were like, ‘Well, there has to be lyrics that fit the story.’”

“My memory is that we just [came up with additional lyrics] right there on the spot,” Shaiman says. “Basically me and Bette. I’m sure everyone else threw in ideas … and it works. And it’s so good in the movie. And it was fun to arrange in the style of Bette Midler so that Kathy and SJP sing parts like The Harlettes would sing, Bette Midler’s backup group.”

Why has the movie, which has become a seasonal favorite, and its “I Put a Spell On You” performance endured all these years?

Shaiman also laments the lack of commercial or streaming availability of Midler’s “I Put a Spell on You.”

“What’s heartbreaking is the fact that it doesn’t exist on a record anywhere… I guess it must be about Bette’s record [label] affiliation. She was with Atlantic [Records] then and I bet they couldn’t make a deal to borrow her [for a soundtrack release]. It’s crazy. … It’s gotta sit somewhere in the vaults at Disney.” (Walt Disney Records could not be reached for comment. Midler’s rendition of “Spell” has never been released commercially or via streaming services, while the movie’s score has only seen a limited release on CD many years ago.)

Also in his chat with the Pop Shop, Shaiman — a Grammy, Emmy and Tony Award winner — discusses his long working relationship with Midler that dates back to the late 1970s. ( “Every dream of mine came true… I’ve been working with her, and great friends with her, ever since.”) Outside of his work with Midler, Shaiman has been an in-demand composer, lyricist, producer and music supervisor for film, television and musical theater. He received his sixth and seventh Academy Award nominations for the 2018 film Mary Poppins Returns (for best original score and best original song: “The Place Where Lost Things Go”).

The Billboard Pop Shop Podcast is your one-stop shop for all things pop on Billboard’s weekly charts. You can always count on a lively discussion about the latest pop news, fun chart stats and stories, new music, and guest interviews with music stars and folks from the world of pop. Casual pop fans and chart junkies can hear Billboard’s executive digital director, West Coast, Katie Atkinson and senior director of Billboard charts Keith Caulfield every week on the podcast, which can be streamed on Billboard.com or downloaded in Apple Podcasts or your favorite podcast provider. (Click here to listen to the previous edition of the show on Billboard.com.)