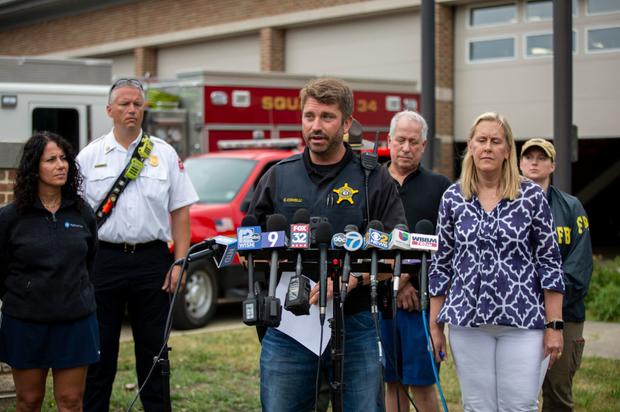 The latest update from today’s tragic Highland Park mass shooting reveals that police have named a person of interest, though he has not officially been deemed a suspect just yet.

As CNN reports, 22-year-old Robert E. Crimo III – who stands 5’11” and weighs 120 pounds – is said to be armed and dangerous, though authorities haven’t explicitly disclosed why he’s been connected to the shooting.

“Crimo, III, has the following tattoos: four tally marks with a line through them on his right cheek, red roses and green leaves on his neck, and cursive script above his left eyebrow,” information on the FBI’s website says, also noting his brown hair and brown eyes.

The 22-year-old is believed to be driving a 2010 silver Honda Fit with an Illinois license plate reading DM80653.

Evidence of a firearm was discovered on a nearby business’s rooftop after the incident, according to police commander Chris O’Neill. The gunman accessed the top using a ladder attached to a building, a Lake County Major Crime Task Force spokesperson also confirmed.

The same source said the weapon used was a “high-powered rifle” and that the attack was “random” but still “intentional.” At this time, authorities are working to uncover more information about the origins of the gun and who purchased it.

Lake County Coroner Jennifer Banek shared that the five people who died at the scene of the crime were adults. Another later died in the hospital, though she wasn’t able to provide information on them.

This marks at least the 308th mass shooting in the U.S. this year, data from the Gun Violence Archive reveals; the first four days of July alone have seen 11, with three of those happening today (July 4).

Check back in with HNHH later for any updates on the Highland Park tragedy. RIP.