‘Halloween Kills’ Soundtrack Scares Up Top 10 Debut on This Chart 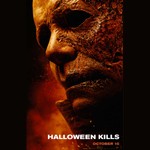 The album sold a little over 8,000 copies in the U.S. in the week ending Oct. 21, according to MRC Data – with nearly 6,000 of that sum from vinyl LP sales. The score album was pressed on multiple colored vinyl variants, including a thematically appropriate “charred pumpkin” black vinyl variant. Halloween Kills’ score was composed by John Carpenter, Cody Carpenter and Daniel Davies.

Halloween Kills also debuts on a number of other Billboard charts, including a No. 4 arrival on Vinyl Albums and a No. 2 bow on Soundtracks. On the latter list, which started in 2001, Halloween Kills surpasses the 2018 Halloween soundtrack (No. 4 peak) as the highest charting Halloween franchise soundtrack in the chart’s 20-year history.

The top 10 of the latest Top Album Sales chart crowded with debuts and re-entries, as Halloween Kills is one of eight debuts in the region, while the No. 1 slot is held by the re-entry of The Beatles’ Let It Be.

Billboard’s Top Album Sales chart ranks the top-selling albums of the week based only on traditional album sales. The chart’s history dates back to May 25, 1991, the first week Billboard began tabulating charts with electronically monitored piece count information from SoundScan, now MRC Data. Pure album sales were the sole measurement utilized by the Billboard 200 albums chart through the list dated Dec. 6, 2014, after which that chart switched to a methodology that blends album sales with track equivalent album units and streaming equivalent album units. For all chart news, follow @billboard and @billboardcharts on both Twitter and Instagram.

The Beatles’ Let It Be re-enters at No. 1 on Top Album Sales following its deluxe special edition reissue on Oct. 15. The set was first released in 1970 as the final studio effort from the band, and also doubled as the soundtrack to the documentary film of the same name. The album spent four weeks atop the Billboard 200 (June 13 – July 4, 1970-dated charts).

For its special edition, the Let It Be album was reintroduced in a variety of expanded formats and editions, including many with previously unreleased tracks, ranging in price from $9.99 (for the standard remastered digital album) to a $200 super deluxe vinyl box set. All versions of the album, old and new, are combined for tracking and charting purposes.

Mac Miller’s fan-favorite Faces mixtape debuts at No. 3 on Top Album Sales and at No. 1 on Vinyl Albums, following its commercial release on Oct. 15. In total for the week, the album sold 34,000 copies – with 32,000 of that sum on vinyl LP, while the remaining 2,000 were on digital download. The mixtape was initially released for free in 2014 but wasn’t commercially issued or distributed to streaming services until Oct. 15, 2021.

Faces’ 32,000 sold on vinyl LP marks the largest sales week on vinyl for an R&B/hip-hop effort, or rap album, since MRC Data began tracking sales in 1991.

Faces is the eighth top 10 on Top Album Sales for the late artist, who died in 2018. On the Vinyl Albums chart, Faces is Miller’s fourth No. 1.

Korean pop group ENHYPEN logs its second top five-charting album on Top Album Sales, as Dimension: Dilemma debuts at No. 4 with 31,000 copies sold (nearly all from its CD editions, as it sold a negligible sum via digital download). Like many K-pop releases, the CD edition of the album was issued in multiple collectible packages (including a Target-exclusive edition). ENHYPEN scored its one previous entry on Top Album Sales earlier in 2021, when Border: Carnival debuted and peaked at No. 4 on the May 29-dated chart.