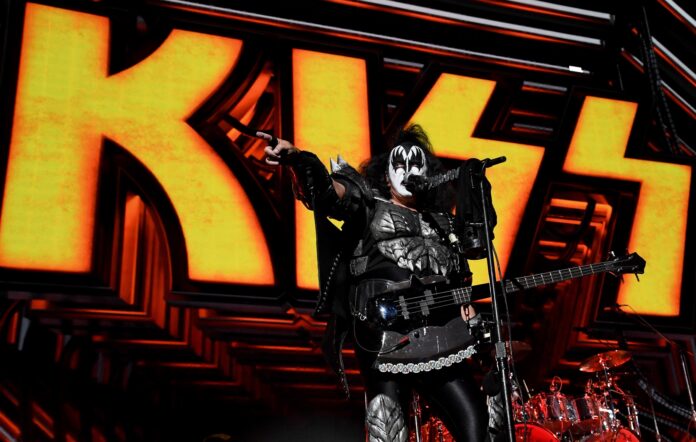 KISS bassist Gene Simmons has claimed that the band will take their extended farewell tour to 100 more cities worldwide.

The band announced back in 2018 that they would embark on one massive final tour, before hanging up their iconic costumes.

In a recent interview, Simmons said the legendary rockers were retiring out of “self-respect” and because of the “love” for their fans.

Simmons was then asked in a recent interview with Chaoszine when he envisions the tour ending.

He responded: “We don’t know. We’ve never retired before. This is our first time. It’s like painting a painting or writing a book. When somebody says, ‘When is it gonna be finished?’ You’re in the middle of it; you don’t know.”

Of the scope of the additional dates, he went on: “The crew is happy. Everybody’s happy,. So we’ve decided to add another 100 cities before we stop. I don’t know how long that’s gonna take.”

“The reason for stopping touring is because of pride and self-respect and a love and admiration for the fans,” Simmons told Full Metal Jackie on an episode of KLOS’ Whiplash recently.

“The last thing you wanna be is to be a world-champion boxer and stay in the ring too long. It’s only a matter of time until your legs are not gonna be able to hold you up, and you’re gonna lose.”

He continued: “We’ve also seen boxers who’ve stayed in the ring too long and bands who continue touring too long. And they forget lyrics and you can see the deep wrinkles in their faces. I mean, it’s just the nature of life as we know it on earth.

“So we’re doing the right thing. We’re gonna quit while we’re on top, do the best we can, and it’ll be sad, but it’s also gonna be happy. On the last show we ever do as a touring band, I’ll be crying like a 12-year-old kid whose foot you’re stepping on.”

After slots in Europe and Australia this summer – including a headline slot at this year’s Download Festival – the band will return to North America at the end of the year for a few more festivals, which is everything they have officially left on the schedule. They also plan to reschedule their Las Vegas residency, which was cancelled late last year.

Last week, the band were met with laughter and online mockery following a concert in Austria, where the band’s logo was displayed with an Australian flag insignia.

The mishap took place at the end of the band’s show at Wiener Stadthalle, with the phrase “KISS LOVES YOU VIENNA” being displayed on the screen as fans were leaving the arena. As pointed out by Twitter user Ben Nguyen, however, the KISS logo featured the Australian flag, rather than the flag of Austria – of which Vienna is the capital city.