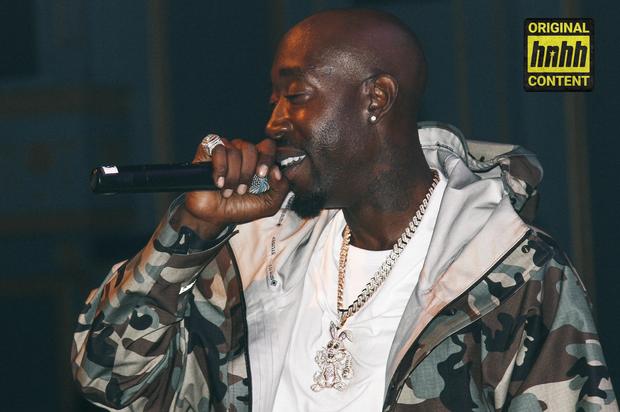 Freddie Gibbs, while increasingly polarizing, remains one of the best at his craft. Though public opinion might be biased due to his ongoing online feuds, some things are just facts and Freddie Gibbs is very good at rapping.

Though we’ve yet to receive SSS, Freddie Gibbs already began laying the groundwork for the album’s release with the Space Rabbit tour. The initial 22-date tour kicked off in the spring across North America with a single Canadian date in Vancouver. Unfortunately for Canadian fans that weren’t on the West Coast, that meant that they’d have to wait for the announcement of another tour post-SSS before they would be able to see Freddie Forgiato in the flesh. Fortunately, his single festival date at Montreal’s Osheaga in early August opened the calendar up for a few other spot dates around the country, including Toronto.

It was a solo show for Gibbs at the Danforth Music Hall. The one-off gig didn’t include warm-up sets from his previous tour openers like redveil or MIKE. However, City Fidelia (a.k.a Ottawa’s Mayor) showed out for his first post-COVID performance. City’s brief set showcased an expert showman in his zone. He energized the crowd through a series of exhilarating bangers. His technical prowess resonated with every flow and cadence. The call-and-responses echoed through Danforth Music Hall before he brought Toronto’s Dom Vallie on stage to perform “Tell Me Please.” Though many weren’t familiar with City before the show, he won over Freddie Gibbs’ audience by the time he ended his set with the Shelley-assisted “Soulmate.”

City was the only opener, but it was enough to drain the audience’s energy. Things grew restless in the block of time between City and Freddie’s set, especially as the DJs attempted to gauge the audience’s point. However, there was a shift when red lights flooded the dimly lit hall, and Mark Morrison’s “Return Of The Mack” blared through the monitors. Gibbs entered from stage left, wearing a camo jacket with his hood and a white tee. Immediately, Gibbs charged with Alfredo opener, “1985,” feeding off the crowd’s energy before he went into “God Is Perfect.”

Gibbs’ humor shined the moment he began going into earlier cuts. After shouting out to his day-ones, who he sarcastically said left him “flattered” by their applause, he leaped into songs off of Pinata like “Thuggin,” “Harold’s,” and “Deeper.“His actual day-ones likely wanted him to go deeper into the catalog (i.e., Babyface Killa, Cold Day In Hell, etc.). Still, we’re in a new era of Freddie Gibbs’s career, where a Grammy nomination cemented his underground status. He made his mark during the mixtape and blog eras, but like most artists, his setlist primarily reflected the records with the highest streaming numbers.

Gibbs was rather calm for the early part of his set, allowing his lyrical aptitude and technical proficiencies to shine. He would breeze through half of a song before the DJ cut the beat, and Gibbs would proceed a capella without losing a breath when he’d perform “Scottie Beam.” Much like a jazz pianist or a rock guitarist replicating a recording of a mind-blowing solo on stage, Gibbs treats his craft similarly. The moments where the music would cut and his voice would loom through the speakers acapella left many in awe at his skill set.

At some point, Gibbs peeked at the setlist with slight disinterest, foreshadowing his approach for the remainder of the evening. After admitting to being largely inebriated and pouring another shot, he went off-script, listing off records that he wanted to perform rather than the ones on the sheet in front of him. Between his levels of intoxication and his spontaneous set list, Gibbs didn’t necessarily allow for smooth transitions, like when he said he was going to perform “Pronto” then forgot about it 10 seconds later and started playing “Gang Signs.” His abilities are second-nature, though, and he can execute each song and flow no matter the circumstances or the substances that enter his body.

The evening ultimately became a more personal affair as the show continued and the liquor flowed. Gibbs’s off-cuff comments – to both his DJ and the crowd – made for some hilarious moments and revitalized the energy between Gibbs and his fans. However, the highlight of the evening was Gibbs’ encore. As promised earlier in the set, he debuted new music. One, in particular, featured DJ Paul, merging the Midwestern flows of Gibbs with a muddy Memphis touch of Three 6 Mafia for a woozy banger. Another one sounded like it had production from Boi-1da, who connected with Freddie Gibbs for “F*ckin’ Up The Count” in 2015. Rumor has it that the two of them were cooking up some heat in Toronto throughout the week, so hopefully, we’ll hear some of that on SSS.

Many rappers these days rely on crowd participation rather than showmanship. Very few have found the sweet spot in between the two. Gibbs remains one of the best in the field, on stage or in the booth. And while the Gary, IN rapper might be showing more interest in acting these days, his live shows prove that he’s a master of his craft.

Kyrie Irving on if he was ever close to leaving the Nets: ‘There were options’ KJM