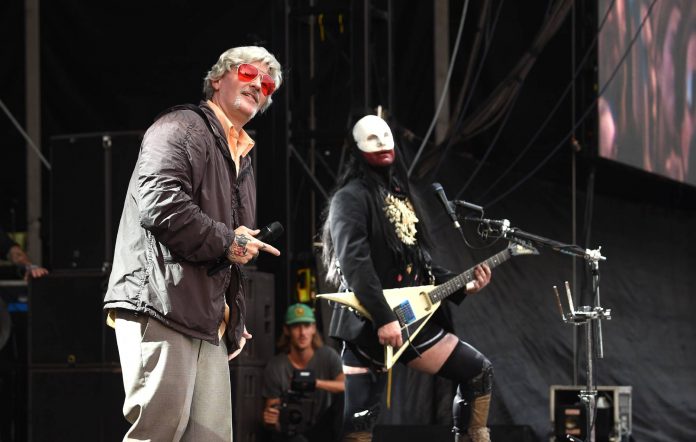 Limp Bizkit‘s Fred Durst has teased the artwork for the band’s long-awaited new album and has suggested it might arrive on Halloween.

The rap-rock veterans released their comeback single ‘Dad Vibes’ last month, after a year or so of teasing their return. The song marked their first new material since 2014’s ‘Endless Slaughter’, a loose track believed to be for their next album.

Last week, Durst began polling his and the band’s followers about which new Limp Bizkit songs he should drop. “Should I drop a new song? Maybe ‘Turn It Up, Bitch’ or ‘Goodbye’? Hmm, or should I just drop the whole new album, all 12 songs? What do you think?” he asked. Durst also asked if their next move should be to release another single or just put out their next album in full.

If Durst’s Instagram post over the weekend is anything to go by then it looks as if fans were more in favour of the latter, with the frontman revealing a portion of the artwork for the band’s new album and indicating it will be arriving on Sunday (October 31).

“Instead, all [pumpkin emoji]’s will drop on Halloween,” Durst wrote over an image he called “Album Cover Piece 1.”

While the artwork teaser doesn’t reveal too much, what it does uncover is something that appears to resemble a colourful drawing or painting – see it below.

The band’s long-gestating follow-up to 2011’s ‘Gold Cobra’ has been known under the title of ‘Stampede Of The Disco Elephants’, but it’s unclear if that is the new music Limp Bizkit are referring to in this recent update.

In June, guitarist Wes Borland offered an update on the album, attributing many of the delays to Durst’s dissatisfaction with his vocals.

“We’ve probably, in the last 10 years, been in the studio to try and complete the record, I wanna say, seven times, to different studios,” he said on Drinks With Johnny, the podcast of Avenged Sevenfold‘s Johnny Christ.

In August, Limp Bizkit cancelled the remainder of their US tour over safety concerns.

In a statement, the band said: “Out of an abundance of caution and concern for the safety of the band, crew and most of all the fans, the Limp Bizkit show this Monday and the remaining August tour is being cancelled.”