Foals pay tribute to the Ukrainian crew of their ‘2am’ video 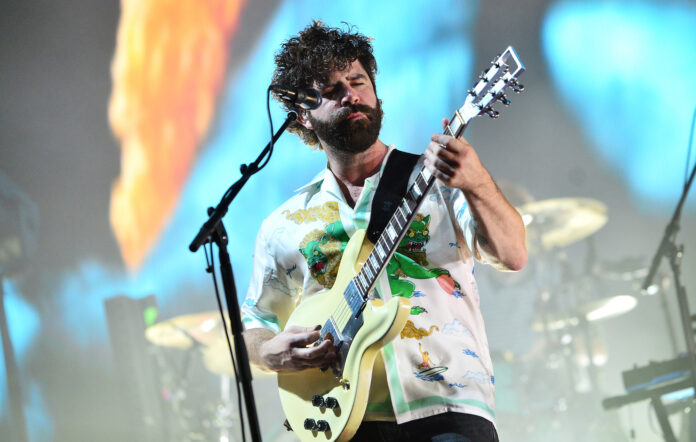 Foals have shared a message of solidarity with the people of Ukraine, highlighting the local team that helped bring their recent ‘2am’ music video to life.

READ MORE: The Big Read – Foals: “Life is something to be cherished and enjoyed”

Russian forces launched a military assault on Ukraine in the early hours of yesterday morning (February 24). It was reported then that Ukraine had officially severed its diplomatic ties with Russia and declared martial law, after Russian President Vladimir Putin ordered an attack on the neighbouring nation, with Ukraine saying Putin had “launched a full-scale invasion”.

Artists around the world were quick to share their support for Ukraine and condemnation of Putin’s actions, with the likes of  Yungblud, Bring Me The Horizon‘s Oli Sykes, Amanda Palmer and Franz Ferdinand‘s Alex Kapranos all speaking out on social media.

Foals frontman Yannis Philippakis was among the cohort, tweeting: “Love & courage to all our friends in Ukraine.”

Love & courage to all our friends in Ukraine.

The band’s main account has now echoed that message, posting a series of photos taken during the shoot for their ‘2am’ video back in January. “Thinking of these amazing people who made filming the ‘2am’ video possible in Kyiv last month,” they wrote. “Wishing all our friends in the Ukraine love & courage.”

thinking of these amazing people who made filming the ‘2am’ video possible in Kyiv last month.

wishing all our friends in the Ukraine love & courage pic.twitter.com/lzxbFZCLLu

Earlier this month, in the band’s recent NME cover story, Philippakis touched on the riskiness of staging the ‘2am’ shoot in Ukraine, saying: “It was a bit surreal. We had to make the call a few weeks ago about whether or not to kill off the idea of going to shoot there. We kind of risked it and everything was fine, but it felt touch-and-go.”

The clip was directed by Tanu Muiño, who – with the backing of an entirely Ukrainian crew – filmed it in her home city of Kiev (spelt natively as Kyiv). Upon its release, Philippakis said: “The moment I spoke to Tanu she was interested in the repetition of the lyrics, which is symbolic of being stuck in repeated patterns of bad behaviour. She wanted to visualise that with labyrinths and maze-like loops.”

Muiño added: “Foals are one of my favourite bands, so this project was a dream to work on with Yannis. The labyrinth idea came from playing the track on repeat and the visuals came together when I met with Yannis. We connected on the creative, which is the ideal situation in videos to have him explain the meaning behind the track and the inspiration of the song.

“The more we spoke, the more the idea revealed itself. We felt the repetition of being stuck in the same place, the same life, the same situations all felt like being trapped in a labyrinth/maze that you are constantly wanting to exit and find a resolution for – you keep trying until you unlock it!”

Ukraine, which has a population of 44 million people, borders Russia along with Belarus, Poland, Moldova and other European nations. As the BBC reports, Russia has long resisted Ukraine’s move towards NATO and the EU. Putin is now demanding guarantees from the West and Ukraine that it will not join NATO, a defensive alliance of 30 countries, claiming that his goal is the “demilitarisation” of Ukraine.

As Al Jazeera reports, Ukrainian President Volodymyr Zelenskyy has announced that the Ukrainian death toll stands at 137 civilians and military personnel, with over 300 wounded. The European Union along with the US and Australia have imposed sanctions on Russia in response.

The post Foals pay tribute to the Ukrainian crew of their ‘2am’ video appeared first on NME.