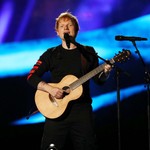 Billboard’s First Stream serves as a handy guide to this Friday’s most essential releases — the key music that everyone will be talking about today, and that will be dominating playlists this weekend and beyond.

This week, Ed Sheeran brings us hits and heartstring-tugging songwriting, Camila Cabello throws a dance party with Myke Towers and Tainy, and Megan Thee Stallion gives a gift to the diehards. Check out all of this week’s First Stream picks below:

Ed Sheeran’s commercial sway has not dulled one bit as he reaches the decade mark of his time in the spotlight — as he releases =, his hotly anticipated fourth solo studio album, he is enjoying a pair of songs, “Bad Habits” and “Shivers,” residing in the top 10 of the Billboard Hot 100. And while = boasts its fair share of radio fare — the starry-eyed ‘80s workout “Overpass Graffiti” sounds like a surefire hit — Sheeran’s first solo album since becoming a husband in 2019 and a father in 2020 also sheds insight into the personal fulfillment that the singer-songwriter is newly experiencing.

The weather may be turning colder and an Adele piano ballad may be at the top of the Hot 100, but the triumvirate of Myke Towers, Camila Cabello and Tainy sound like they’re ready to party as if summer is just about to kick off. “Oh Na Na,” an effervescent, bilingual dance single, push Cabello to match Towers’ flow and swagger, to great success; following “Don’t Go Yet,” the pop star sounds more comfortable letting loose over Tainy’s frenetic drum assortment.

Megan Thee Stallion, Something For The Hotties

Although Megan Thee Stallion fully arrived on last year’s proper debut album Good News, the Houston rapper had been blowing up long before that, with projects like 2018’s Tina Snow and 2019’s Fever showcasing her wit and microphone dexterity. Something For The Hotties functions as a grab bag of sorts — some old songs, some previously unreleased material, some new tracks and a summer banger in “Thot S–t” — but the rattling bass and top-shelf sexual metaphors make this an essential listen for any Hot Girl Meg completist.

Lil Uzi Vert is already a hip-hop superstar; tracks like “Demon High” suggest that he could be a pop superstar, too, if he applied his melodic genius to the most lip-smacking hooks tossed his way. If last year’s Eternal Atake was a rap workout from a technical savant, this deliriously fun new single follows the formula of its Backstreet Boys-interpolating hit “That Way,” letting Uzi draw out a chorus with his helium croon and serving up an immediate top 40 contender.

The War On Drugs, I Don’t Live Here Anymore

With their fifth album of heartland-friendly indie-rock, The War On Drugs have amplified the strongest aspects of their sound and tossed away the spare parts, resulting in a sprawling 10-song project that never feels meandering. Adam Granduciel puts on a songwriting masterclass by yearning for personal resolution but bringing his listener along for the ride, while songs like “Old Skin” and “Victim” deploy their percussion for maximum emotional effect. Press play on a long drive, turn the volume all the way up, and bask in one of the most complete rock albums of the year.

Coming from a small town in Kentucky and raised on gospel music, Elvie Shane has made a lot of noise in the country world recently thanks to his soulful smash “My Boy.” The rest of Backslider, Shane’s debut album, smartly keeps the singer-songwriter’s church-bred vocal tone front and center, lifting up tracks like “I Will Run” and “Sundress” and making the case for a new mainstay in country music.

If a soundtrack boasts new music from both JAY-Z and Ms. Lauryn Hill, that is a soundtrack worth paying attention to — and the music from The Harder They Fall, the much-anticipated new Western premiering on Netflix next week, is very much worth exploring ahead of the film’s wide release. While JAY effortlessly raps over whizzing bullets alongside Kid Cudi on “Guns Go Bang,” Hill sounds reinvigorated spitting bars next to Fatoumata Diawara on “Black Woman.”