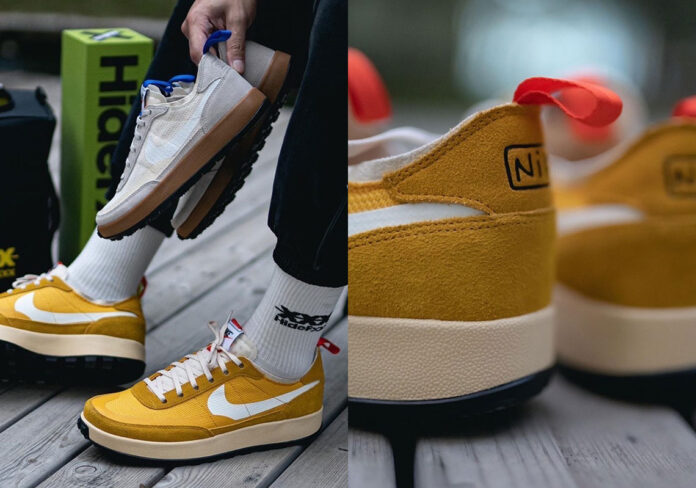 In the world of sneakers, Tom Sachs is best known for the Mars Yard design first launched back in 2012 and then in 2017. Before 2022 ends, the 55-year-old American designer seems prepped to add yet another tally to his NikeCraft partnership with the release of the General Purpose Shoe, which has recently surfaced in a mostly-yellow colorway.

Reminiscent of the tennis-inspired Killshot 2, the low-top silhouette boasts a design much more palatable than Sachs’ other footwear offerings. Durable suede and reinforced mesh make up the entirety of the pair’s upper, with profile swooshes being printed on. Pull tabs on the tongue and heel inject non-standard functionality to the court-inspired model, which have appeared on other Tom Sachs-branded Nike projects. The padded inner-lining and breathable tongue also deliver improved functionality to the General Purpose Shoe, enabling wearers to lace the style up for any and all tasks. Underfoot, sole units don’t seem to feature of of the cushioning solutions found across the Nike Running lineup, opting instead for an ostensibly EVA foam midsole and rubber outsole combination; the latter maintains a waffle pattern that’s rooted in the Swoosh’s performance heritage.

Enjoy a first-look at the upcoming sneakers ahead, courtesy of Instagram user @knowing_kicks, and anticipate a Nike SNKRS drop before the second half of the year commences.

For more experimental takes branded with swooshes, check out the sacai Nike Cortez expected to arrive throughout fall and winter.

A Bodacious Array Of Textiles Fill The Nike Air Force 1