HomeNewsFather of nine-year-old boy that sustained “life-threatening injuries” at Astroworld speaks out...
News 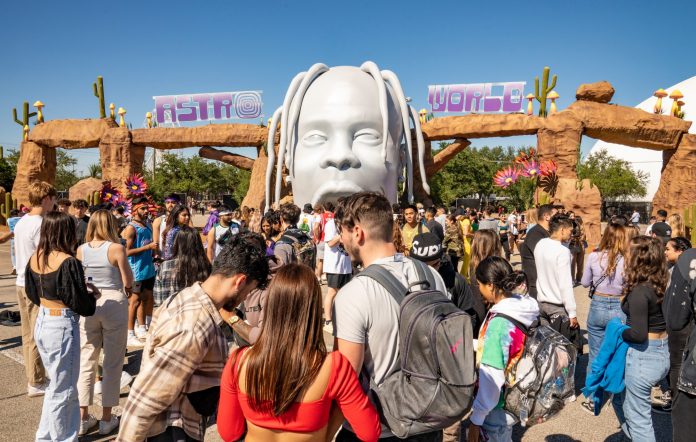 Treston Blount – the father of nine-year-old Ezra, who is currently in a medically induced coma after he sustained “life-threatening injuries” at Travis Scott’s Astroworld festival – has made his first public statement about the incident.

He explained that Ezra had become a fan of Scott through his appearance in Fortnite and partnership with McDonald’s, and was “stoked, like, he was ready to go” when the two arrived at Astroworld.

The father and son reportedly arrived at Scott’s headlining set with a considerable distance from the stage, however found themselves entwined in the stampede that killed nine and injured hundreds of others when the performance began.

“We was in the back, way in the back and I figured, ‘Okay, this is cool,’ because y’know, the front can get a little wild,” Treston told ABC 13 reporter Stefania Okolie. “The countdown started [and] everything was cool – for a split second.”

Once concertgoers began to rush the stage, Treston – who’d been standing with Ezra on his shoulders – became separated from his son. “I’m yelling out ‘I can’t breathe,’ there’s other people around me saying they can’t breathe,” he continued. “It was definitely a moment where I didn’t know what else to do.”

Treston then fell unconscious while Ezra was knocked to the ground. Unable to support himself, the child was trampled by punters amid the chaos, before he was pulled out of the crowd by “a Good Samaritan”. Once Treston regained consciousness and was able to remove himself from the crowd, it’s reported he rushed to a medic tent and, after filing a police report, was handed a photo of an injured Ezra.

“Just to see him in that condition… I just wasn’t ready for that,” Treston said. “It was like a horrified [sic] movie.”

Watch the full ABC 13 report below:

9YO Ezra Blount remains on life support today. I sat down with his father last night for a tough conversation. He explains why he brought his young child to #AstroWorld – a festival that NO ONE SHOULD HAVE DIED AT. Story: pic.twitter.com/IjhAYzVKnN

Ezra remains in a medically induced coma, with attorney Ben Crump – who alongside co-counsel Alex and Bob Hilliard has been retained by the boy’s parents – saying he “sustained life-threatening injuries” as a result of the crowd crush.

“The suffering that this family is going through is immeasurable,” Crump said in a statement shared earlier this week. “This little boy had his whole life ahead of him – a life that is currently hanging in the balance because of the reckless mismanagement that ensued at the Astroworld Festival.

Earlier in the week, Ezra’s great grandmother Tericia, a nurse, offered a statement to Rolling Stone. She said: “It’s horrific. We’re just hanging in there, trying to stay strong. He has injuries to his kidney, to his lung, to his liver. Basically every organ has damage. He had cardiac arrest. His heart is weak and has damage as well. And his brain has swelling, and he’s in an induced coma.

“They’re just trying to keep him comfortable and trying to figure out a plan for him. They tried to take him off the medications that were paralyzing him, to keep him still, and they had to put him back on. We’re just at that place right now, just hoping for the best in spite of all the negative information.”

In the wake of their tragedy, the Blount family have filed a negligence lawsuit against Scott and Live Nation. They’re seeking $1million in damages, alleging that Scott and the event’s organisers failed to stop the performance for at least 40 minutes after the surge.

A growing number of lawsuits have been filed against Scott, promoter Live Nation and other parties involved with organising the festival, with one lawyer telling Rolling Stone that he expects his firm to represent “hundreds, if not thousands” of plaintiffs by the end of the week.

Since the Astroworld tragedy unfurled, Scott has asked families of those impacted to get in touch via email. A statement, shared by his team, said: “He is distraught by the situation and desperately wishes to share his condolences and provide aid to them as soon as possible, but wants to remain respectful of each family’s wishes on how they’d best like to be connected.”

The post Father of nine-year-old boy that sustained “life-threatening injuries” at Astroworld speaks out about incident appeared first on NME.