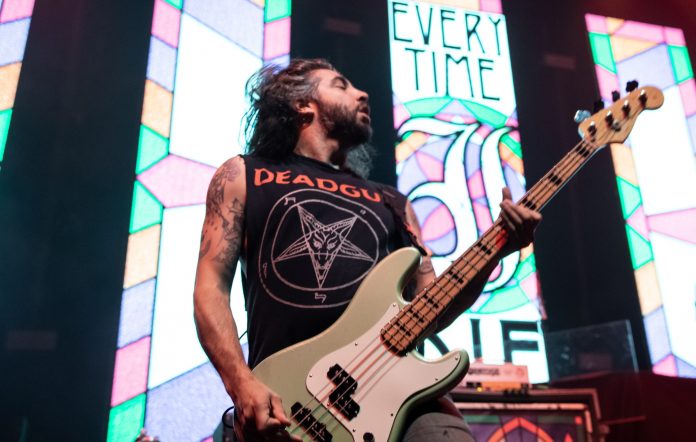 After a public spat between Every Time I Die frontman Keith Buckley and the band’s other four members – leading to their breakup this week – bassist Steve Micciche has given his perspective in a lengthy string of tweets.

They wrote: “While we hoped to come to an agreed upon legal statement that outlined the truth, we were informed today of something planned to be released not mutually agreed upon that consists of inaccuracies and controls a narrative to benefit one.”

The following day, Buckley responded with a lengthy statement, saying that “any emotional [or] metal connection” he had with his former bandmates had been “thoroughly severed” when he got a letter from a law firm on December 20, which Buckley had shared on the same day the band’s statement was issued.

The letter said that the firm, Savur Law, had been retained by the rest of the band “for legal representation in connection with a separation agreement” between them and Buckley, requesting he contact them to discuss “the business terms of an amicable separation between the parties”.

The news came after the band said last month that they were working on issues with Buckley “privately” after the singer announced an impromptu hiatus days earlier, saying he’d be skipping three of the band’s scheduled shows.

“Caring for my own mental health has taken priority over EVERYTHING else in my life,” he wrote at the time. After Every Time I Die made their own announcement confirming that the shows would not be cancelled, with fans invited to “come and help [them] finish this tour”, Buckley hit back online.

Buckley went on to allege that his brother, Jordan Buckley, “[told] an outsider that ETID had been in talks to replace me this entire time”. Following the statements from Buckley, Every Time I Die announced that they would be cancelling the last three shows of the tour.

In Micciche’s new statement – which you can in full here via his Twitter – he talks about how tensions within the band came to a head in December as conflict played out online.

“This band of 20 plus years of hard work, dedication, doing it our own way and with pride was [torn] down and ripped away in a matter of 4 or so tweets at wee hours of the morning in December of 2021,” Micciche writes.

“A band that we were so immensely proud of was reduced to TMZ/soap opera ashes in quite possibly the saddest demise of anything I’ve ever seen in my life, and we were a part of it.

Micciche goes on to claim that last year, Buckley privately told their new manager he wanted his brother Jordan Buckley out of the band, causing an “internal rift” within the group. However, he adds that “after numerous talks about every member being more open, more transparent, we were feeling good about the future”.

Micciche goes on to detail the band’s tour behind their album ‘Radical’, saying that they were “in full support” of Buckley traveling separately to the rest of the band.

“We supported him in ways I won’t disclose, but he knows, he had full support of the band. There was no crazy drinking on this tour. I don’t drink on tour. Goose doesn’t, Andy doesn’t. Jordan maybe 2 & 2 more for stage props,” he wrote.

When Buckley tweeted about his decision to withdraw from three of Every Time I Die’s tour dates in December, he touched on the way sobriety had affected his time in the band.

“Traveling separately, away from alcohol and the behaviors of those who choose to drink, has brought me peace of mind and has made me the best performer I have ever been,” he wrote at the time.

In another tweet, Micciche directly responded to Buckley’s claim that the rest of the band had been planning to replace him with another vocalist.

“I have zero clue what Keith claims to…have heard. But there was zero conversation, I mean, zero, about replacing Keith as the singer of ETID. Keith knows that cause I’ve told him that personally and via text, NUMEROUS times recently and over the years.”

Miccciche goes on to claim that the band found out Buckley was leaving the tour on December 3 via Twitter, with no prior consultation. When the band announced they would play three remaining shows without him, Buckley took it as a “personal attack”, according to Micciche.

“Whatever he claimed to hear did not warrant in any way shape or form the slander of a fellow band member publicly nor did it warrant tarnishing the legacy of the band we were all in for over 2 decades,” Micciche wrote.

Micciche goes on to describe tension in the lead-up to the band’s annual ‘Tid the Season holiday shows in December, and accuses Buckley of “[dragging] the band name over hot coals online for the public to see”, among other things.

“There were completely irrational tweets sent out ruining the thing that EVERYONE in the band built,” he continued.

“I ultimately wish Keith the best and truly hope he does find inner peace and no hate in his heart like he constantly says he has. Enjoy the music that’s out there, and hopefully myself and the rest of the guys that choose to make music with me will see you soon.

“I know what has transpired online over the past month has been confusing, vague, sad, totally out of character, leaving people angry, etc.

“I know this, because Andy, Jordan, Goose, myself and every single person behind the scene to make ETID go have felt those with you… We didn’t budge. Not for a second. We chose ETID. Like we ALWAYS have. These 5 members.”

Every Time I Die’s ninth studio album, ‘Radical’, arrived back in October of last year.