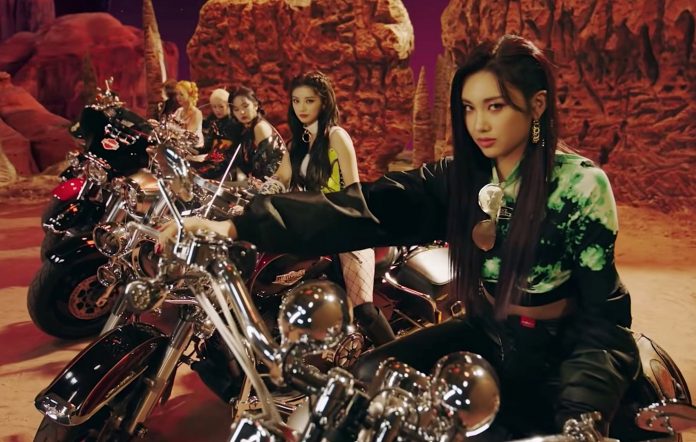 EVERGLOW have release a teaser for the music video of their upcoming single ‘Pirate’.

READ MORE: EVERGLOW reflect on their new single ‘First’, the importance of self-love and why they look up to IU

Yesterday (November 24), the K-pop girl group released a 15-second teaser clip for the music video of ‘Pirate’, the lead single off their forthcoming mini-album ‘Return of The Girl’. The project is set to drop on December 1 at 6PM KST.

The captivating visual sees each member of EVERGLOW gearing up for battle as they wield weapons such as bows and swords, while leader Sihyeon waves a flag bearing their official logo. It ends with the girl group riding motorcycles, soundtracked by an intense, EDM-driven beat.

In addition, the group have also released the official tracklist of the forthcoming record. ‘Return Of The Girl’ is set to include a total of five tracks, including the lead single ‘Pirate’, as well as the songs ‘Back Together’, ‘Don’t Speak’, ‘Nighty Night’ and ‘Company’.

Yuehua Entertainment first announced the girl group’s return with a “coming soon” poster earlier this month. ‘Return of The Girl’ will be the group’s second official release of 2021, after their May single album ‘Last Melody’, which featured the lead single ‘First’.

Back in August, EVERGLOW had also released the special single ‘Promise’ for UNICEF’s Promise Campaign. The song was accompanied by a choreography clip, which featured the members performing the track on an open field.

Back in July, EVERGLOW made an appearance on Seventeen Magazine’s ‘8 Bit Melody Challenge’ series where they took on hits by various popular artists. Throughout the video, the girl group member sang a number of hit songs, including Lady Gaga‘s ‘Poker Face’, Britney Spears‘ ‘Baby One More Time’ and Dua Lipa‘s ‘Break My Heart’.