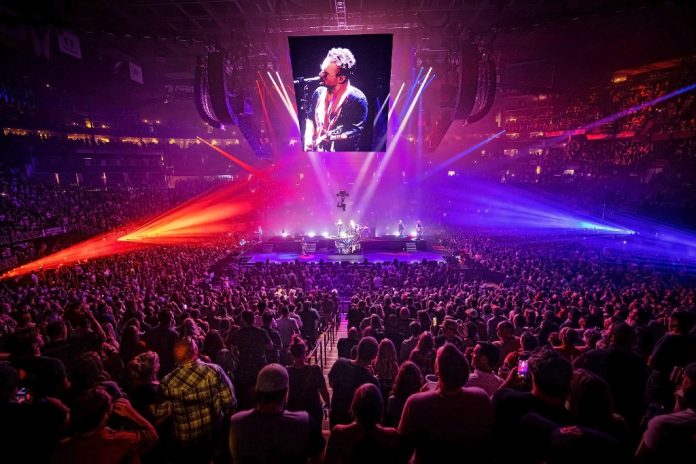 Nearly 700 days since wrapping his critically acclaimed Double Down Tour, reigning CMA Entertainer of the Year (and current repeat nominee) Eric Church stepped to the microphone in Lexington, Ky. on Friday evening to officially launch The Gather Again Tour with a show two years in the making.

Prowling around his brand-new 2,400 square foot multi-level stage, positioned in the center of the arena floor for his first-ever in-the-round set up, Church launched into three and a half hours of music spanning his impressive decade-plus catalogue of both hits and deep cuts beloved by his loyal Church Choir.

From multi-Platinum-certified singles including “Talladega” and “Drink In My Hand” to fan favorites like “Chattanooga Lucy” and “Pledge Allegiance to the Hag” as well as a sampling of the 24 songs making up his latest chart topping project, Heart & Soul, the current CMA Male Vocalist of the Year nominee’s vocals shone through stronger than ever after the unexpected time away from the road.

Indeed, Church continued well past the end of the intended set list each night in response to the crowds palpable energy, with Friday’s performance eventually transitioning from a “Born to Run” rendition into his 6x Platinum-certified “Springsteen,” thrilling the crowd with a personalized chorus of “a soundtrack to a Lexington Friday night” before pausing mid-song to describe the opening night celebration as “the tip of the spear for what this tour is” and proclaiming: “We are made to gather – and gather we did and gather we shall!”

The congregation continued Saturday evening in Columbus, Ohio with a brand-new set list as Church remains committed to giving fans in each city a completely unique experience.

The Lexington Herald-Leader raved of the “energetic 40-song bonanza” that was opening night: “the entire show possessed an intriguing stylistic variance” and “was massively audience-friendly” while the Columbus Dispatch celebrated the way Church “treated the arena like his own personal honky-tonk, keeping the evening loose and likeable rather than bombastic or tightly controlled” as he “combined the storytelling power of country music with the energy and anarchy of rock.”

The Gather Again Tour continues with 55 additional dates to come as Church visits cities throughout the U.S. and Canada into 2022. Tickets to all dates, including the grand finale at New York City’s iconic Madison Square Garden, are on sale now at EricChurch.com.

All tour dates will enforce local venue and/or city guidelines regarding COVID-19 precautions. Church will be touring with a fully vaccinated crew.

For more information, visit www.ericchurch.com and follow on Facebook and Twitter and Instagram. Fans can also download the Eric Church Official App for exclusive offers only available on tour – including seat upgrades, contests and special merchandise – all while connecting with fellow fans from around the world.