HomeMusicEMPIRE’s Ghazi On Expansion Into Africa, Nashville and Crypto: ‘We’re The King...
Music

EMPIRE’s Ghazi On Expansion Into Africa, Nashville and Crypto: ‘We’re The King Of The Multisector’ 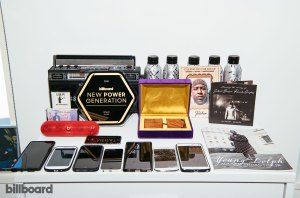 When multi-hyphenate music company EMPIRE was getting ready to open the doors of its new 10,000-square-foot San Francisco recording studio in the spring of 2019, founder/CEO Ghazi predicted it would propel his independent operation to the next level.

“I told people: ‘Once we get a studio, watch the pulse of the company change,’” he says from his Bay Area office. Two years later, the bet paid off, as EMPIRE landed three Billboard Hot 100 hits born from that studio: Yung Bleu, Chris Brown and 2 Chainz’ “Baddest,” which reached No. 56; Money Man and Lil Baby’s “24,” which reached No. 49; and Fireboy DML and Ed Sheeran’s “Peru,” which debuted on the chart in February at No. 79.

As the music business has evolved over the past decade, EMPIRE has often seemed ahead of the curve, disrupting some aspects of the industry while taking the lead in others. The company began strategically as a digital-first distributor in 2010, offering one-off licensing deals to hip-hop’s major-label castoffs and young guns. But once it had cemented its own distribution pipelines, it then expanded as a label, publisher and technology entity with merchandise and social media divisions as well as crypto interests. (Last November, the company claimed it was the first record label to pay an advance in bitcoin.) EMPIRE has opened a studio in Midtown Manhattan (which produced the Jim Jones–Migos collaboration “We Set the Trends”) and plans to do the same in Nashville (where it has operated a country music division since 2019). And having established offices in the Middle East and the United Kingdom, the company officially announced the launch of EMPIRE Africa — where it has already operated for two years — with a new local executive structure in place and several label partnerships in Nigeria, Ghana, South Africa and Ivory Coast.

“I think we’re the king of the multisector,” says Ghazi. “A lot of companies say they are, and while they dabble in other sectors, they’re not very good at them. We are really excelling at a lot of things.”

A collection of memorabilia that includes used cellphones and memorial programs for Young Dolph, XXXTentacion and The Jacka, and a plaque honoring Ghazi as a member of Billboard’s 2019 New Power Generation. “I often remind myself where we’ve been to magnify where I’m headed,” he says.

What has been your experience in the African music business?

It has allowed us to connect with some of the most incredible talent we’ve ever worked with — people like Olamide, Fireboy, Buju. I’ll go out on a limb and say we’re equally as impactful in West Africa as we are in the United States. People are starting to understand the value of their rights, of the monetization of streaming — what that equates to on a global scale. They’ve seen a couple of Afropop and Afrobeats artists cross into global economies, like Wizkid and Davido and Burna Boy, and now Fireboy’s record with Ed Sheeran. There’s also a greater commitment to monetization of the market and to building infrastructure.

So how does EMPIRE fit into the market?

For us, it’s very natural. It’s the same thing that we did here in the United States with urban artists. It’s what we’re starting to do in Nashville and in some of the Asian territories. It just so happens that there’s a symbiotic relationship with the music in Africa, where Afropop/Afrobeats plays very nicely with who we are as a company in terms of our cultural makeup, the type of music that we evangelize. So we’re just continuing the same trend of education and investing in talented people and evangelizing our culture and our ideology of joint partnerships and collaboration.

Far right: The artwork depicting Ghazi’s name in Arabic, which was a gift from his executive assistant, Samyah, is “a reflection of my roots as a Palestinian.”

Last year, you opened a new office in the Middle East/North Africa. What are your plans there?

I learned very early on that in that part of the world, the rights work differently — and in many cases, there are no rights at all. It’s still very early in development because there was no infrastructure there for things like copyright and publishing. I know it’s going to be a long and hard journey because things are not very monetized over there, so you could put in a lot of work and not see a return. But culturally, it’s significant for me because of my Palestinian background. I feel an emotional attachment to do something about it. But also, from the business side of it, it’s a long play — it’s a gigantic market. There’s 300 or 400 million Arabs in that area.

What’s next for EMPIRE?

Probably Brazil, maybe India. I know Russia is going to be emerging at some point. You’re starting to see money coming out of those territories. And then at some point, you just say, “OK, we got enough areas covered where if you pushed a button and sent the Bat-Signal out, hitting all those different epicenters would, by a process of osmosis, hit surrounding secondary and tertiary [markets].” Like if you have representation in Singapore and Jakarta, then maybe you’ll also get Malaysia, Vietnam, Thailand.

What are the opportunities for a company like yours in such a traditional music city as Nashville?

We’ve already started to have some success. We just got our first platinum record with Tenille Arts. Terrestrial radio can’t be what it is to the country genre forever. It dominated the airwaves for pop, for R&B/soul, for rap, for a long period, and then we saw a transition to streaming. We now know that radio follows streaming in the urban genres. Traditionally, a lot of country artists were of the belief that the only way to succeed was through traditional radio. Now you’re starting to see some acts break through without radio. I think that’s the tip of the iceberg — and that’s going to help us grow in that market in the next few years.

A certificate from the mayor of San Francisco honoring Ghazi for his contributions to the community. “I wouldn’t be who I am today if
I wasn’t born and bred in San Francisco.”

How do you shift the mindset of a business sector that has always done things one way?

You go after the younger generation of artists. Everything is about user behavior. I’m not going to fight to change the mind of someone who is used to doing something one way for 20 years. I’m going to go create that user behavior at the inception point. So if you’re a brand-new artist, I’m going to teach you to be a streaming artist from the very beginning. That has been the philosophy: signing a lot of early talent that’s not stuck doing things a certain way. We’ll have to develop some talent, so it will take a bit longer [to break them], but I’m OK with that.

How do your deals stand out from the pack?

Our deals are full-on partnerships, so the way the rights are written, recoupment is likely; master reversion, if there is a reversion, is likely; and artists tend to have a lot more creative input, not control. “Input” is the right word because I think in a perfect world neither party controls the creativity. We come to a collective decision. The deals are framed in a way that makes a lot more sense for both parties to be successful, and a good deal is where neither party is taking advantage of the other side. I always tell people, “I’ll take both points of view, but the truth lies somewhere in the middle,” and I think our deals lie in the middle. I think that’s why we’ve had so much success. It just took a long time for the attorneys to understand what we were trying to accomplish. The economics of a deal are more important than the advance number, and by economics, I mean splits, recoupment rates, things of that nature. Getting artists and attorneys to understand that took a while.

What brought them around?

Time. It’s creating user behavior. You could pitch the same thing to 10 artists, and they’ll all take the deal with the higher advance but the lower split. Convince one artist to take the higher split and lower advance and that they’ll make more money on the back end, recoup faster and get a bigger deal later, and that artist will be a significant champion. We took care of the artists, and then the artist community took care of us.

Bobblehead figures of rappers Too $hort (right) and the late Mac Dre. “The Furly Ghost and Short the Pimp are Bay Area hood heroes,” says Ghazi.

EMPIRE claimed it was the first record label to offer an artist advance in bitcoin. Why?

It’s the same conversation — it’s about creating user behavior. We did an advance in bitcoin and furthered that thought process by doing the advance on CashApp, which I believe is the lowest common denominator because it has great market penetration. So if you already have a shitload of people using CashApp to share U.S. dollars, it’s very easy to use CashApp to send bitcoin — and now you’re starting to get people acclimated to the idea that bitcoin is OK and easy to use. It’s insanely powerful.

How do you see Web3 changing and challenging the traditional industry?

It gives you a whole other medium. Terrestrial radio has its segment of audience; streaming has its segment; traditional social media like Instagram, Facebook and Twitter have their segment; [non-fungible tokens] are going to have theirs. The metaverse brings a whole other powerful segment where you can do a lot of things, from concerts to museums to meeting spaces. Anything you can do in the physical world you could do in the metaverse and without the bureaucracy of the physical world. If I want to build a nightclub in the metaverse, I don’t need to get a permit from the planning and zoning committee to do it. Does it have the same implications of a physical nightclub? Maybe not. But maybe it has different implications that are also very successful.

With your growth and the money pouring into the business, have you thought about selling?

[Laughs] No. I don’t think there’s a number that somebody could present that could even make me flinch. It’s not about the money for me.