HomeMusicElton John Remembers Friendship With John Lennon as Highlight ‘Of My Life...
Music 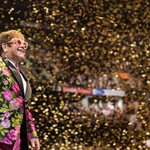 Elton John’s career reached orbit in the early ‘70s and, based on recent events, it’s never coming down.

Consider, Elton’s life story, re-told in the biopic Rocketman, was a box-office hit and a multiple award-winner, taking an Oscar (for best original song), and a brace of Golden Globes.

And, after getting cut short by the pandemic, his award-winning Farewell Yellow Brick Road: The Final Tour will return to North America and Europe for new dates starting in May 2022, followed by shows in Australia and New Zealand.

When he does return to the road, the Rock And Roll Hall of Famer may well have added to his collection of silverware. The Rocket Man’s latest studio album, The Lockdown Sessions, is hurtling to No. 1 on the U.K. chart, and elsewhere. It’s already spun-off a hit, with lead single “Cold Heart” hitting the chart summit in the U.K.

Not bad for a shy kid born Reginald Dwight.

On Wednesday night (Oct. 27), Elton zoomed in for a chat and a trip down memory lane on The Tonight Show.

The new album was a happy accident, he explained. During lockdown, artists “asked me to start playing on their and singing on their own records.”

Not just anyone, but Stevie Wonder, Stevie Nicks, Miley Cyrus, Gorillaz. The list goes on.

“Never in a million years could I have expected what’s happened to me in my lifetime,” he admitted to Jimmy Fallon. “I didn’t ever intend to become Elton John, I just wanted to be involved in music and play it.”

Elton should be revved up and ready to go when his tour resumes. He’s currently recovering from hip replacement surgery, something he couldn’t put off any longer, and didn’t need to, thanks to all that downtime created by the global health crisis.

Elton also spoke of his friendship and collaboration with John Lennon as one of the “highlights of my life and my career,” having Stevie Wonder sing him a happy birthday, and much more.