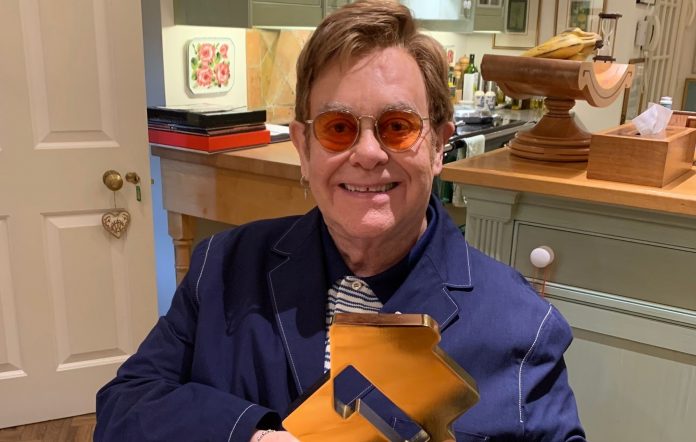 Elton John has earned his first UK Number One album in almost a decade with new LP ‘The Lockdown Sessions’.

The legendary musician’s new record, which arrived last week (October 22), debuted at the top spot shifting 31,000 chart sales, 84 per cent of which were made up of physical sales

‘The Lockdown Sessions’ – which follows 2016’s ‘Wonderful Crazy Night’ – was one of four new releases to land inside the Top Five, alongside Lana Del Rey’s ‘Blue Banisters’ (Number Two), Duran Duran‘s ‘Future Past’ (Number Three), and Biffy Clyro’s ‘The Myth Of The Happily Ever After’ (Number Four).

The other album inside the Top Five is Coldplay’s ‘Music Of The Spheres’, which was last week’s Number One. It is the year’s fastest-selling album after shifting 101,000 chart sales in its first week.

In a four-star review of ‘The Lockdown Sessions’, NME‘s Gary Ryan called it an “all-bets-off stylistic game of spin-the-bottle” that “feels attuned to 2021’s post-genre Spotify world, as Elton continues to further his musical universe. The Rocketman remains in orbit”.

Meanwhile, Ed Sheeran has played a snippet of his forthcoming Christmas single with Elton John.

Sheeran first revealed that he’d collaborated with John on the single in an interview with Dutch radio station NPO Radio 2. John has since expanded on the news in his Big Read interview with NME.

“I was sworn to secrecy and then big mouth fucking Sheeran goes to the Netherlands! It’s supposed to come out – we haven’t finished it yet, so there’s still work to be done,” John said.

The post Elton John earns first UK Number One album in almost a decade with ‘The Lockdown Sessions’ appeared first on NME.