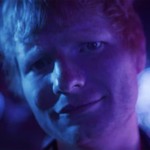 Ed Sheeran goes on a road trip for the ages in the high-energy video for his ’80s synth-pop homage “Overpass Graffiti,” which appears on the singer’s new album, =. The Jason Koenig-directed clip that dropped on Friday (Oct. 29) opens with Sheeran hopping off his tour bus to use pop into the loo at a gas station and then getting left behind.

After a late-night walk along the highway in his robe, Ed gets picked up by a blissed-out group of van lifers streaming their way across the desert. The singer slips into his swimsuit for a day of horsing around in a swimming hole with the ridiculously photogenic bunch, and, listen up Sheerios, there are several shots of a buff-looking Sheeran splashing around without a shirt.

A late-night scare from a spooky bearded guy toting a shovel sends the group into the woods for a wild, neon-splashed forest rave that finds Ed going all-in on glow-in-the-dark body paint and dancing. The walkabout eventually lands him on the back of a biker’s motorcycle and then in the backseat of a station wagon driven by a cool dad determined to get Ed back onto his bus.

“Overpass” appears on Sheeran’s just-released fourth studio album and it was co-written by the singer with Snow Patrol frontman Johnny McDaid and Fred Gibson. Though Sheeran recently revealed that he’s quarantining at home after testing positive for COVID-19, Sheeran is slated to make his third appearance on Saturday Night Live on Nov. 6, where he’s slated to perform the = singles “Bad Habits” and “Shivers.”

Watch the “Overpass Graffiti” video below.