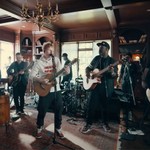 Ahead of the Oct. 29 release of =, singer-songwriter Ed Sheeran contributed a performance to the lauded NPR Tiny Desk Concert series on Tuesday (Oct. 26).

Sheeran played multiple cuts off of the forthcoming record, with Billboard Hot 100 tops 10s “Shivers” and “Bad Habits” bookending the setlist. He also threw some curveballs in for his fans, performing a cover of Foy Vance’s “Make It Rain” and previewing an unreleased song called “Overpass Graffiti,” which will be on the album.

Backed by a bustling live band and backing vocals curated by musical director Adam Blackstone, Sheeran played a lively and soulful set, at times rocking out with his acoustic guitar and other times just passionately singing into his microphone. He donned a white hoodie displaying the = symbol in promotion of the new record.

The performance setlist is as follows:

Sheeran is scheduled to perform on Saturday Night Live’s Nov. 6 show in promotion of his new record, but his recent positive COVID-19 diagnosis might put his performance slot in jeopardy as he noted that he would be unable to “plough ahead with any in person commitments” for the meantime.

Check out the full at-home performance below.