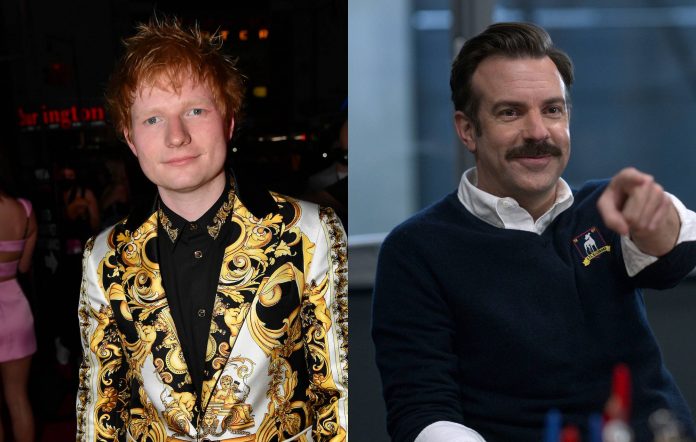 READ MORE: ‘Ted Lasso’ season two review: proof that football can be a force for good

The singer was appearing remotely on The Jonathan Ross Show on ITV last night (October 30) to promote his new album ‘=’, a week after he announced that he’d tested positive for COVID, meaning that all his planned promotional appearances around the album’s release would happen from home.

Alongside Sheeran on the show’s panel of guests was Hannah Waddingham, who stars as Rebecca in Ted Lasso.

As such, talk soon turned to Sheeran’s love of the show, which stars Jason Sudeikis in the title role.

“I’m obsessed with it,” the singer said. “It’s one of these shows where I’m constantly recommending it to people and they’re watching it instantly. I just think it’s great.”

Revealing his plan to work on music for the next season, which is reportedly set to begin filming in January 2022 [via Collider], Sheeran added: “I got asked to do a song for the next season,” before Waddingham interrupted him, urging: “Do it! You’ve said it here – you have to now!”

Season two of Ted Lasso landed on Apple TV+ earlier this summer. Reviewing the show, NME wrote: “Ted Lasso is about more than just football: in season two we get to know the players better for their strength and their fearlessness, and we’re graced with empathetic, hopeful storylines that tell us that love does win. It’s about our world as it could be. As it should be.”

Last week (October 23), Sudeikis joked about the success of the show during his appearance as host of Saturday Night Live.

During his monologue he discussed his past as a cast member on SNL for 10 years. “The last couple of years, though, I’ve been working on this Apple TV+ show called Ted Lasso,” he said. “Which somehow became a hit. It’s truly shocking to me because it’s built around two things Americans hate: soccer and kindness.”

Theme music for the show is written by Marcus Mumford of Mumford & Sons.

The post Ed Sheeran is writing a song for season three of ‘Ted Lasso’ appeared first on NME.