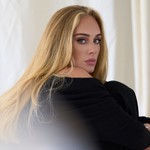 Along with multiple honors for Adele, the coronation is notable for Columbia Records, which released the ballad Oct. 14.

Columbia is the first label to monopolize the Hot 100’s top three thanks to a trio of acts credited on three titles since Oct. 22, 2005. That week, Island Def Jam Music Group ruled with Kanye West’s “Gold Digger,” featuring Jamie Foxx, and placed at No. 2 with Nickelback’s “Photograph” and No. 3 with Mariah Carey’s “Shake It Off.” IDJMG earned the honor the week before (Oct. 15, 2005), as well, with “Gold Digger” at No. 1, “Shake It Off” at No. 2 and “Photograph” at No. 3.

Interscope Records likewise achieved the feat in 2005, for two weeks that April and May, thanks to 50 Cent’s “Candy Shop,” The Game’s “Hate It or Love It,” featuring 50 Cent, and Gwen Stefani’s “Hollaback Girl.”

Further, dating to the Hot 100’s adoption of MRC Data information in 1991, Columbia is the only label to rank at Nos. 1, 2 and 3 on the Hot 100 in a single week thanks to three acts on its roster with all three songs having peaked at No. 1, as “Easy” joins “Stay” and “Industry Baby” in having attained chart-topping status.

Meanwhile, multiple labels have since held Nos. 1, 2 and 3 on the Hot 100 simultaneously through one or two acts, most recently Republic Records on the chart dated Sept. 18, when Drake became the second act, after The Beatles, to claim the entire top five in a single week.