HomeMusicDon Omar & Nío García Take Us Behind the Scenes of ‘Se...
Music 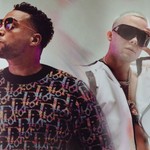 Don Omar and García had never met before, but it turns out García was a longtime, die-hard fan.

“It started like a dream. What would I do if I could work with Don Omar?” says García in an exclusive behind-the-scenes interview. “I’ve studied you my whole life. You’re my favorite artist,” he tells Don Omar, who has been releasing singles from his upcoming new album.

“I’m not known for collaborating with a lot of colleagues […] But this was one of the easiest songs to accomplish in the album,” Don Omar says. “It’s a friendship that’s just beginning but I hope will give us a lot of music.”

Watch the full interview here, ahead of the song’s video release at 9 p.m. ET.