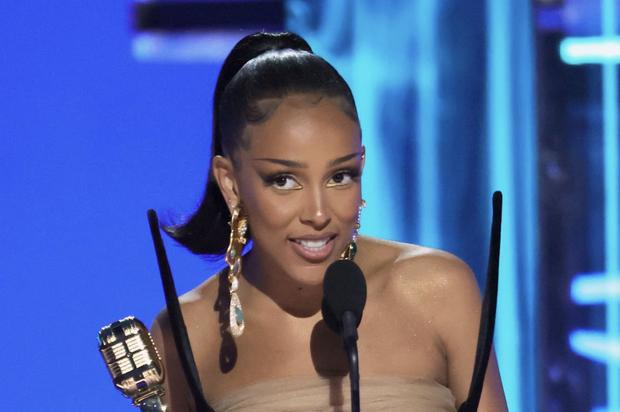 People are giving Doja Cat’s eyebrows a break and today (August 18), are instead focused on Rolling Ray’s accusations. The controversial social media star is known for his unfiltered comments about pop culture, including insisting that he has the inside track on all things Beyoncé because they’re allegedly friends. He has taken issue with Saucy Santana who Ray said created the song “Walk” to make fun of his disability, and now Ray is targeting Doja Cat, who he claims stole his signature phrase.

On Twitter, Doja shared a text video that featured her voice saying the words: “It was supposed to give but it did not give what needed to be gave to the highest of giving.” She even dropped off her “itsgivingwebsite.com” link.

It is all reportedly connected to Doja’s upcoming clothing line or branding, according to alleged trademark paperwork shared online. Someone reposted the documents that show Doja and her team reportedly filed for the trademark last year.

However, in 2019, during the Popeye’s Chicken Sandwich craze, Rolling Ray jumped into the viral conversation about the franchise to share his thoughts. In a video he posted to social media at the time, he said, “It’s not even giving what y’all said it was supposed to gave, no, I wasted my money! So, send me my money back, now!”

The phrase became a staple online across all platforms, and now Rolling Ray is accusing Doja of taking it without credit. “This b*tch said let me steal from this handicap black b*tch & copy righted my saying uh whole year ago !! Lord I’m tired of fighting.” There have been people who agree with Ray, but Doja Cat’s devoted fanbase has been on the attack.

Check it out below.