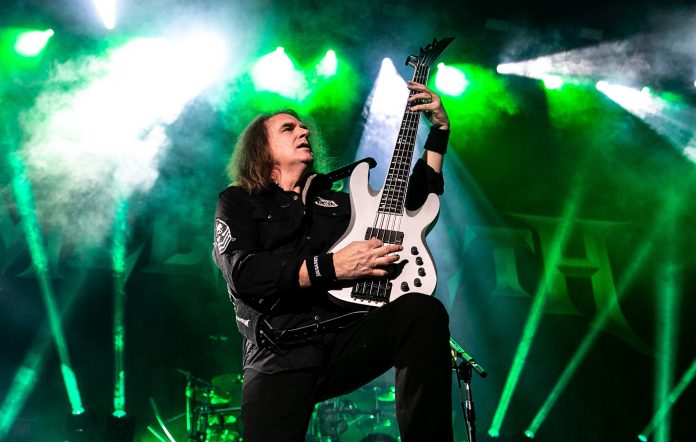 Former Megadeth bassist David Ellefson has commented that he’s “perfectly content and happy” in his first interview since being fired from the band five months ago.

Speaking to Aftershocks TV alongside the three other members of his new band The Lucid, Ellefson was asked if he was experiencing a new level of creative freedom following his departure from Megadeth.

Ellefson was a founding member of the group in 1983 and performed as a member up until their first dissolution in 2002. He rejoined the band in 2010 and stayed on until his dismissal earlier this year.

As Blabbermouth reports, Ellefson admitted that Megadeth was “always going to be [his] legacy” but said that his “exploration of what does life hold” began following the band’s initial breakup in 2002.

“The 2000s, having that time away to just kind of reinvent and just, again, fall in love with making music again, to me, that has always been there,” Ellefson said.

“It’s fun to create for creation’s sake and not because it has to be motivated from anything else,” David said. “So I guess I’m kind of glad to just be right where I’m at. To be honest, I’m perfectly content and happy where I am right now. I’m not gonna lie, it’s perfectly fine. So I’m all good.”

In May, Megadeth parted ways with Ellefson following allegations that the bassist groomed an underage girl online after several explicit videos and messages circulated online.

“We do not take this decision lightly,” Dave Mustaine said in a statement at the time. “While we do not know every detail of what occurred, with an already strained relationship, what has already been revealed now is enough to make working together impossible moving forward.”

Ellefson denied the claims, saying “as much as it’s not something I’m proud of, these were private, adult interactions that were taken out of context and manipulated to inflict maximum damage to my reputation, my career and family.”

Ellefson went on to share a statement from the girl in question. “Yes, those video calls did happen, but I was the one to initiate them and never was I underage, I was always a consenting adult.” The bassist has since filed revenge-porn charges against the person who uploaded the videos.