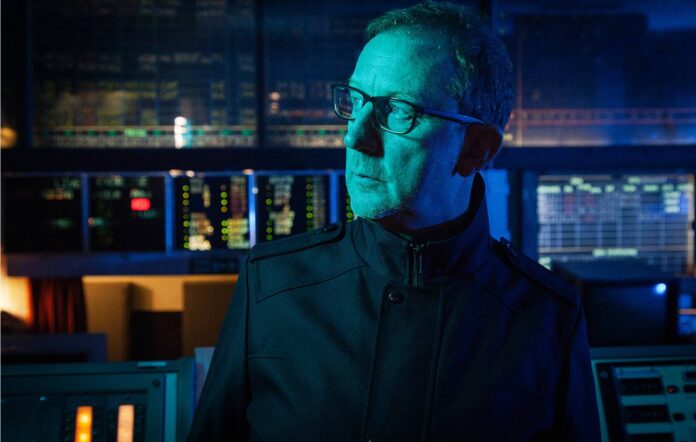 Blur drummer Dave Rowntree has shared his debut solo single ‘London Bridge’. Check it out below, along with our interview with Rowntree discussing a new record on the way, politics, and what the future holds for Blur.

Released on Cooking Vinyl and produced with Leo Abrahams (Wild Beasts, Brian Eno, Ghostpoet) the emotive synth-led track was inspired by the drummer’s childhood growing up in Colchester, before moving to London with Blur.

“There was a phase in my life as a child when the number 126 would pop up everywhere,” Rowntree told NME. “I was living at Number 126 on my road, I would get the Number 126 bus every morning, and I just kept seeing the number everywhere. I know that’s just the brain working its pattern recognition trickery, which has allowed us to thrive as a species, and I get all that – but it’s funny when that happens to you and just how powerful it is.”

He continued: “When I first moved to London with Blur, a similar thing started happening at London Bridge. Things would happen around there that suddenly made the place seem bizarrely meaningful in my life – as if the universe was trying to scream ‘LONDON BRIDGE’ at me!

“The genesis of the song was, ‘Isn’t it strange that this sense of place can take up so much of your mind’. It ended up just talking about me, really. This is from an album about me – sorry! It’s a solo album and eventually I have to tell my own story.”

Admitting that the song is not representative of the rest of his solo material to come, Rowntree revealed that the sound of the song came from the same synthy place as much of his work composing scores for film and TV – with credits including Netflix series The One and the BBC technological crime thriller The Capture.

“It started as a guitar song, but I was never really happy with that so I started again and turned it into a synth song,” Rowntree told us. “It was that period of my life in the late ‘80s and early ‘90s when the London Bridge memory thing happened, so it seemed like a natural route to go down to get all of my old analogue synths and drum machines out and start again that way.”

Rowntree started work on solo material around four years ago, penning songs in his home studio for himself between his “dayjob” hours as a composer. “In my downtime, I started writing songs, meeting up with other people and collaborating with them, coming up with ideas,” he said. “We did that with Blur and that part of being a musician was something I’d really been missing.

“I was just noodling along, having ideas and things and then of course, lockdown happened. I suddenly found that I had a lot of time on my hands. I was speaking to my producer friend Leo and we were both locked down in our studios, so we decided to work on these songs together.”

In order to lay down his “bank of solo songs” that he had built up, Rowntree said that he had to get used to the idea of being front and centre of the project.

“For me, music is all about collaboration, and that’s what I’ve tried to do here with a lot of interesting people. I’ve just been trying to navigate my way around the fear of a blank page.”

And he is ready to step on stage as a frontman, rather than a drummer?

“That is the £64,000 question!” he replied. “It’s quite easy to get used to being at the back of the stage and being protected from the screaming hordes by your drum kit. I’m going to be seen at these gigs – when they happen – standing with a microphone in front of the stage. I think I’m going to be fine with that, but you don’t know until you do it.”

With a solo album due in the next year, Rowntree said that the songs from the record were written to played live, while still “textural and evocative”. Beyond that, there is also hope that we’ll soon see a comeback from Blur – especially after as well as guitarist Graham Coxon teased more activity from Blur and frontman Damon Albarn claimed that the Britpop legends had been in talks, and “had an idea” of how to make their return.

Asked about his bandmates’ comments, Rowntree told us: “The problem as with all bands was that there was willingness to do it, but no opportunity to do it. Now the opportunities are opening up again, so we’ll just have to see. We’re all up for it; I can give you that exclusive: we’re all up for it!”

He added: “It would be lovely to have a celebration and get back out in the fresh air again. That would be wonderful. It’s a difficult time for touring at the moment, with various problems meaning that venues and crews aren’t available. It’s not quite as simple as going, ‘Let’s just book this show in the yard!’ like we would have done in the pre-pandemic and pre-Brexit days.”

Music aside, Rowntree has also spent much of the 21st Century working in politics – going as far to be elected as a Labour Councillor in Norfolk, among his other achievements. Asked about the scandal that surrounds the current Tory government, the drummer and songwriter described Boris Johnson and his party’s actions as “unbelievable”.

“I can’t remember a time when politicians have had such a lack of accountability,” he told NME. “All of these individual issues would have been the end of the career of pretty much any other Prime Minister in history. That’s both the benefit and the danger of large majorities – the final arbiter of a Prime Minister’s conduct is Parliament, and if the Prime Minister controls Parliament then the Prime Minister is unaccountable, apart from every five years when there’s an election.”

He went on: “I can’t think of a time since I first started taking note of politics that there’s been such a lack of accountability and a lack of interest in that fact by the public. Everyone’s just shrugging their shoulders and going, ‘Oh well, that’s what he’s like! We knew he’d be a shower of shit when we voted for him’ – and then voila! A shower of shit! It’s just all factored in.”

So will his upcoming debut solo album be loaded with politics?

“It’s not a record about politics, but it’s a record written in political times,” he replied. “The songs that I’m working on are definitely set against that backdrop. I remember the 1970s, and it was a horrible time, but now we seem to be nostalgic as if it was some kind of golden era.”

‘London Bridge’ by Dave Rowntree is out now.

The post Dave Rowntree tells us about debut solo single ‘London Bridge’ – and what’s next for Blur appeared first on NME.