Dave Grohl recalls the night he first met Paul McCartney and Ringo Starr: “I was mesmerised” 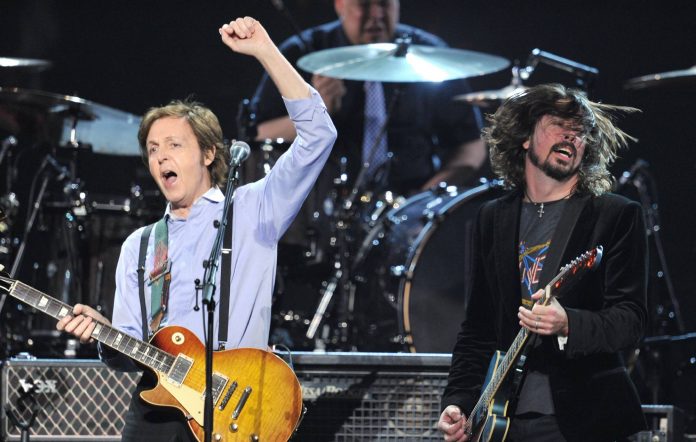 Dave Grohl has recounted the first time he met the two surviving members of The Beatles, sharing the story to his blog Dave’s True Stories.

READ MORE: The 10 most ripping yarns from Dave Grohl’s new book ‘The Storyteller: Tales of Life and Music’

The latest entry to Grohl’s blog – which evolved from pandemic posts on Instagram, and eventuated into his recent book The Storyteller – titled “Entering Valhalla” (and taken from The Storyteller) is a retelling of when Grohl first met Paul McCartney and Ringo Starr in 2002.

Grohl recounts being approached by Dhani Harrison (son of the late George Harrison) after a Foo Fighters show at Wembley Stadium, and being asked to perform a tribute to his father.

A week after the meeting, following the tribute concert at the Royal Albert Hall on November 22 – which also featured the likes of Eric Clapton, Tom Petty and the Heartbreakers, Ravi Shankar, Jeff Lynne of ELO and McCartney and Starr – Grohl said he was led backstage. “I noticed Paul McCartney out of the corner of my eye, chatting away with friends, and I couldn’t help but stare,” Grohl remembered. “There. He. Was.

“What happened next will forever remain a blur. I don’t recall exactly how Paul and I were introduced, what was said, or how long we talked, but I do remember putting on my best ‘this is not the most incredible thing ever to happen to me’ face while trying to keep from making a fool of myself.”

Grohl continued in his entry to say how the meeting caused him to phone his mother, whom he explains bought him his first electric guitar and a Beatles songbook when he was 11 years old. “Every day, she watched me strain my little fingers to form the chords within those pages while sitting in front of the public school record player she brought home from work,” Grohl recalled.

You can read the full entry here.

In keeping with his appreciation for The Beatles, Grohl was the latest celebrity to appear on the most recent episode of the BBC’s CBeebies Bedtime Stories (October 8), reading from Starr’s children’s book, Octopus’s Garden.

Before his reading, Grohl said his favourite books take him to places he wishes he could visit. He added: “I love this story because it was written by someone who plays the drums – just like me!”

The post Dave Grohl recalls the night he first met Paul McCartney and Ringo Starr: “I was mesmerised” appeared first on NME.