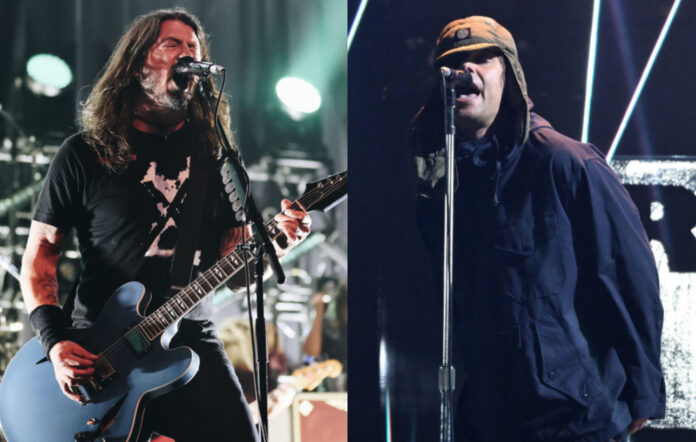 Dave Grohl has spoken about his recent collaboration with Liam Gallagher, and has called the former Oasis frontman “one of the last remaining rock stars”.

READ MORE: Liam Gallagher: “I sound good. I look cool. I talk from the heart”

Earlier this month, Gallagher released ‘Everything’s Electric’, the first single to be taken from his upcoming new solo album ‘C’MON YOU KNOW’, which is set for release on May 27 and is the follow-up to 2019’s ‘Why Me? Why Not.’.

The song was co-written by Foo Fighters frontman Grohl, who also plays drums on the track, and its producer Greg Kurstin.

In a new interview with NME, Grohl, who is currently promoting Foo Fighters’ new gross-out splatter horror Studio 666, praised Gallagher and talked about how the track came about.

“Unfortunately we didn’t do it in person but I love being in the same room as Liam,” he said of the collaboration. “It’s like putting a fucking quarter in a juke box and just turning it up with that guy. It’s fucking great. Obviously, he’s an amazing singer and he’s a fucking rock star. He is one of the few last remaining rock stars.”

He continued: “He was making a song [‘Everything’s Electric’] with the producer Greg Kurstin and they needed a beat which I think was described as something ‘Sabotage’-esque [Beastie Boys] and so I fucking served it up. I served up the beats. And the fucking single turned out great. I love that song I honestly do. I was dancing to it the other night.”

Gallagher and Grohl first met a number of years ago when the Foos and Oasis toured together, and speculation about a collaboration between the two has been building in recent years.

Speaking about Grohl’s contribution in a recent NME Big Read interview, Gallagher said it was the first time the Foo Fighters frontman had ever sent him a song, but Grohl’s bandmate Taylor Hawkins sends him one “every fucking week”.

Grohl’s contribution, brought to Gallagher himself by Kurstin, was chosen over any of his friend Hawkins’ offerings because “it’s an out-and-out rock’n’roll tune”. The drummer’s ideas, meanwhile, he said were “a fucking bit kinky, man”.

Later this year Gallagher will play his biggest solo shows to date, including two sold-out gigs at Knebworth. You can see his upcoming tour dates below and find any remaining tickets to the tour here.

Gallagher will also perform at Lowlands Festival in the Netherlands and Rock in Rio Lisboa in Portugal this summer.

Meanwhile, Dave Grohl made his debut appearance on the hugely popular YouTube interview series Hot Ones earlier this week.