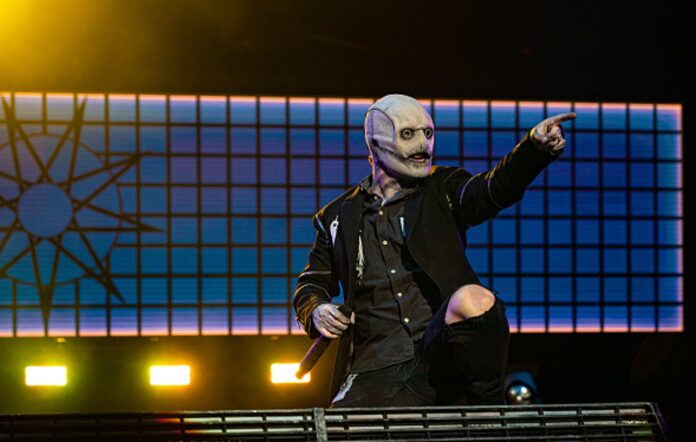 Corey Taylor revealed his favourite Slipknot mask in a recent Reddit AMA (Ask Me Anything) with fans.

To celebrate the release of the band’s seventh album ‘The End, So Far’ which came out last week, the frontman answered a series of fan questions on the social platform.

Asked by a fan to pick his favourite mask from throughout his time in the band, Taylor replied “this one”, referring to his current one.

The singer was also asked if he had a favourite mask of any of the other band members. “Sid’s is ridicks,” he replied.

The frontman was asked by another user which masks were the “most and least comfortable to wear”, to which he answered: “None and All.”

Another Reddit user wondered if there were any films, TV show or books that inspired any aesthetic aspects of the band, to which Taylor replied: “Not really. But Cronenberg’s mask in ‘Night Breed’ certainly inspired my new one this time around.”

In a four star review of ‘The End, So Far’, NME wrote: “Aside from the blood, the gore, the theatrics and the noise, there’s clearly always been much more to the band’s ability to shock and surprise – and now it seems their next left turn of an era could be their most daring yet. As Taylor warns on the old-school ‘Tallica-worthy arena shredder of album centre-piece ‘Warranty’: ‘Isn’t this what you came here for?’”

Last week, Taylor spoke to schoolchildren about Slipknot’s music, answering questions posed to him by 10 and 11-year-olds.

Appearing on BBC Sounds with host Craig Charles, Taylor was grilled by US fifth-graders, with one asking how he first became a musician.

“It all started with singing when I was about 10-years-old. And I realised that I could pick up a guitar and I could find the notes that were being played on the song that I was listening to, which, I then realised that I had what is called pitch,” he said.

“It’s not perfect pitch, but it’s darn close… I taught myself how to play guitar, so I could write songs… then it was just a matter of getting people together to jam and have fun and dance. The rest is history. But it all stemmed from me just loving to sing, and loving to sing along to stuff that I liked.”