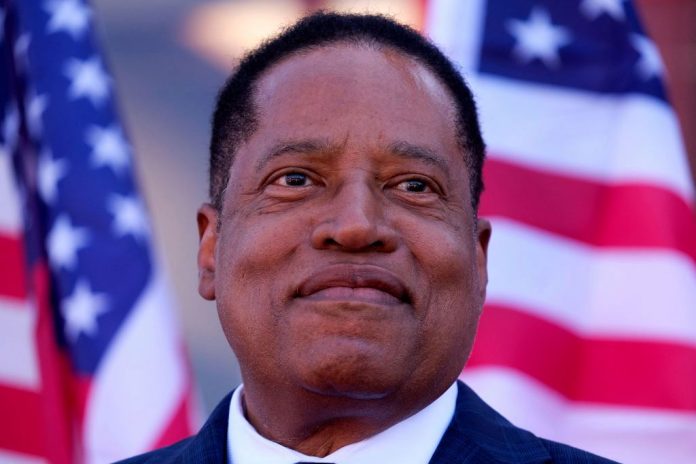 Whoa now, “brotha”, there’s a lot of sugar in that there kool-aid…

We’ve seen a lot of skin folk shine shoes over the years but this kind of bootlicking is legendary. Seriously, one day when right-wing white folks build a huge public monument of their favorite coloreds, Larry Elder’s mayo-moisturized face will be front and center.

The conservative talking head and “politician” recently made an appearance on Candace Owens cesspool of a program to stress the importance of white people, the descendants of former slave owners, being paid reparations. Yes, Larry Elder believes that our oppressors are owed compensation because the Civil War and the 13th amendment stripped them of “their property”.

“When people talk about reparations, do they really want to have that conversation? Like it or not, slavery was legal,” Elder said. “Their legal property was taken away from them after the Civil War, so you could make an argument that the people that are owed reparations are not only just Black people but also the people whose ‘property’ was taken away after the end of the Civil War.”

We can’t make this stuff up. Hear it directly from the yessuh-bawse’s mouth in the video clip below.

BREAKING: Larry Elder called for SLAVE OWNERS to get reparations in newly unearthed footage by @RzstProgramming. Share this everywhere and remember to VOTE NO on the recall! pic.twitter.com/mdyH68jc8m

Please, whatever you do, never be a Larry Elder or a Candace Owens. We don’t all have to agree on everything. Hell, Black folks disagree about plenty of things. But don’t be these people.