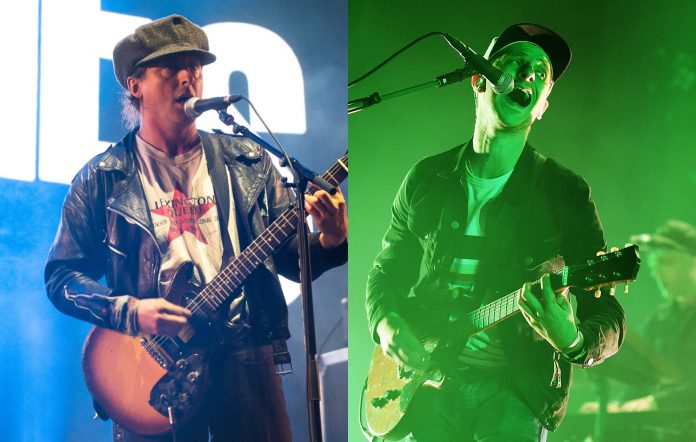 Carl Barât has revealed that he is currently working on new music with Jamie T.

MORE: Watch The Libertines show us around their new Margate Hotel, The Albion Rooms

Barât took to Instagram yesterday (October 25) to share an image of himself with Jamie and The Prodigy‘s Olly Burden, who is reportedly producing The Libertines‘ upcoming fourth album (via Music-News).

Burden and Barât previously teamed up to write two tracks for Black Honey‘s second record, ‘Written & Directed’, which came out in March.

“Da boys in the band… Been cookin’ up some dope lit sick shiz innit,” Barât captioned the new photo of the trio, adding the hashtags “#session”, “#sessionipa” and “#englishmeninabaseballcap”.

Jamie T – whose latest studio album ‘Trick’ arrived in 2014 – posted a snap of himself with Barât back in May, when he visited The Libertines’ Margate hotel, The Albion Rooms. Last year, Barât covered Jamie’s track ‘The Prophet’.

“Met some wonderful people through the years,” T wrote beneath his image. “[Carl Barât] has to be one of my favourite. U r my guitar hero brother. Thankyou for having me.” See the post below.

It’s currently unclear as to what form the new collaboration will take.

The Libertines’ latest full-length, ‘Anthems For Doomed Youth’, was released in 2015. It came as the long-awaited follow-up to their self-titled second LP, which came out in 2004.

Speaking to NME in October 2020, Carl Barât explained that The Libs had been using The Albion Rooms to work on their highly-anticipated fourth album. “It’s been going well, but it’s been difficult with COVID,” he said, citing delays caused by travel restrictions.

“We’re just waiting to get back on it, really. We’re all writing and it’s all positive,” Barât continued.

“We’re just waiting to get back and lay stuff down, it’s just a matter of when. It would be nice if we could do it here. That would make a lot of sense. We’ve never been readier. We just need to get together and do it.”

Libertines frontman Pete Doherty, who now lives in France, returned to the UK in September for a string of intimate acoustic gigs. He took to the stage in Huddersfield, Swansea, Wolverhampton and Chester.

Earlier this month, Doherty announced that he had married Katia de Vidas – just two days after revealing the pair were engaged. de Vidas is the keyboardist in Doherty’s band The Puta Madres.

The Libertines, meanwhile, played a trio of gigs in 2021 – including an outdoor concert in Coventry as part of the Terry Hall-curated ‘Home Sessions’.