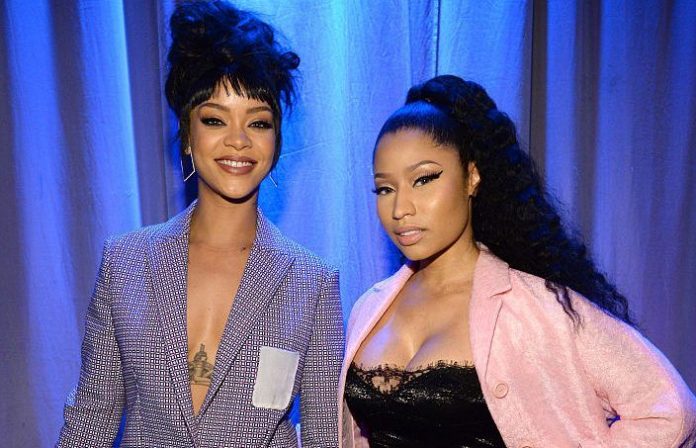 Rihanna and Nicki Minaj came together for a double date night over the holiday weekend.

When two of the biggest women in the world of music and entertainment come together, fans can’t help but get excited. Rihanna and her boo, A$AP Rocky, met up with Nicki Minaj and her husband, Kenneth Petty, for what looks to be a glammed-up New York City night. The latter also brought their little one, who they lovingly refer to as Papa Bear, who is set to celebrate his first birthday later this month.

Nicki also posted a video of her and Rihanna during their reunion, which featured Rih revealing some info about Barbados and Trinidad and Tobago, where the girls are individually from. According to the “Sex With Me” singer, their people, historically, don’t get along.

“You know Bajans don’t like Trinis?” Rihanna asked, to which Minaj gasped. “And Trinis don’t like Bajans. They draw a line in the ocean over flying fish.”

In the end of the clip, Rih promised to explain more about the feuding islands to the rapper “another night.”

While this meeting could just be two old friends catching up, of course, fans immediately jumped to the conclusion that some new music from the pair is coming soon. Nicki has been doing her fair share of guest verses over the past couple of years, but, as we already know, Rihanna hasn’t been in the studio in a while, so we probably shouldn’t hold our breath.

One other possible conclusion fans have drawn is that Minaj is going to walk and/or perform in Rih’s upcoming Savage X Fenty fashion show. Following up 2019’s absolutely epic performance, Vol. 3 of the mogul’s lingerie fashion show is set to premiere later this month–so we’ll find out if Nicki is in the mix very soon.

A post shared by SAVAGE X FENTY BY RIHANNA (@savagexfenty)