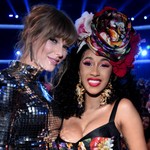 Cardi B is joining the conversation about All Too Well: The Short Film, Taylor Swift’s visual companion to the original 10-minute version of “All Too Well” that resurfaced from the vault for her Red (Taylor’s Version) album.

Cardi took notice of a fan’s tweet gushing over the extended recording of Swift’s classic about a once magical, ill-fated but unforgettable love affair. The rapper shared that she’d viewed the short film it soundtracks on Saturday (Nov. 13).

“Yes I just watched it today ….very impressed, loved it a lot,’ Cardi tweeted of the All Too Well film, which Swift wrote and directed. Sadie Sink and Dylan O’Brien star in the film.

At a New York City screening of the film, where packets of All Too Well-branded tissues were handed out to attendees, Swift encouraged fans to “feel your feelings” as they watched. “You do not need to be stoic, serious, or anything that you are not if that is not how you want to feel during this. Be yourselves.”

In an appearance on The Tonight Show this week, Swift hinted to Jimmy Fallon that she’ll be performing the full, 10-minute version of the song while serving as musical guest on SNL Saturday night.

See Cardi B’s reaction to Swift’s All Too Well short film below.

Yes I just watched it today ….very impressed, loved it a lot https://t.co/OUXWHUaBg2