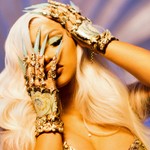 After last year’s season finale, which ended with an explosion, John Oliver kept his final 2021 episode of Last Week Tonight inside the studio — but recruited several celebrities to help him bring the year to an end, including Cardi B and this season’s frequent finger-snap guest, George Clooney.

He briefly recapped his “tricky year,” which started with him filming in front of a “white void,” as he calls it, before moving back into the studio in September amid tight COVID restrictions. “But we still managed to have some fun,” he noted, going over some of the highlights from his past show, which included the fact that Clooney appeared every time Oliver snapped his fingers.

But Oliver was still feeling down.“It’s definitely a strange year, and despite being back in the studio, I still haven’t seen most of my staff since March of 2020,” he lamented.

So what did he do?

Snapped his fingers to summon Clooney to make him feel better. Clooney’s solution was to then gave Oliver the power to summon any celebrity by snapping his fingers for the next few minutes. “I’m not supposed to do this but you seem more pathetic than usual,” Clooney told him. First up was Jennifer Coolidge, who had no idea who Oliver was, first calling him Jimmy Kimmel and then confusing him for Jimmy Fallon.

Will Ferrell joked that Clooney gives that power to anyone at the drop of a hat. “Last week I got summoned by a guy who sold Clooney a pack of Trident,” he said. RuPaul was next. “I’m sorry, my dear, but it’s time for you to sashay away,” RuPaul told Oliver, using his famous catchphrase from RuPaul’s Drag Race. Cardi B appeared next in the bit, confused about what was going on and blaming Alexa, followed by The Office’s Brian Baumgartner, Cameo’s most bankable star, who thought he was actually doing a Cameo appearance before being set straight by Oliver.

“If this isn’t a Cameo, then just get the f–k out of my phone,” an irritated Baumgartner said, then snapping his fingers and disappearing. The white void of Oliver’s lockdown-era shows then appeared, noting that it had landed its own talk show on HBO Max. “They liked this face and just thought it would be better suited for a comedy show than what you were doing,” the void said. Leslie Jones kept trying to get rid of Oliver to no avail. “White man won’t leave, white man won’t leave!” she exclaimed.

Clooney returned with some words of wisdom. “Just because this year didn’t work out like you thought it would, that doesn’t mean that shamelessly bringing in celebrities for the finale wouldn’t cheer you up because — say it with me — ‘celebrities make everything better except in the many situations where they do not,’” they said together. “I do feel 20 percent better, at least,” Oliver noted.

After the credits rolled, the White Void was then seen hosting its show, dubbed White Void Tonight, where it dissected what went wrong with HBO Max’s Space Jam: A New Legacy before Oliver interrupted to give some unwanted advice about the show’s format. The Void then espoused a theory about the Sept. 11 terrorist attacks were “an inside job” before Oliver went at it to get it to stop talking. In last year’s season finale, Oliver ended the show by standing outside with a giant set of white numbers reading 2020. As he did in 2016, he ended his last show of the year by blowing it up. Hitting a red button, he blew up the sign — and, metaphorically, the year itself.

This article originally appeared on The Hollywood Reporter.

Share
Facebook
Twitter
Pinterest
WhatsApp
Previous articleAnthrax’s Frank Bello on Writing New Memoir: ‘I Was Literally Reliving It’
Next articleTaylor Swift Stuns In a Wedding Dress for ‘I Bet You Think About Me’ Video: Watch