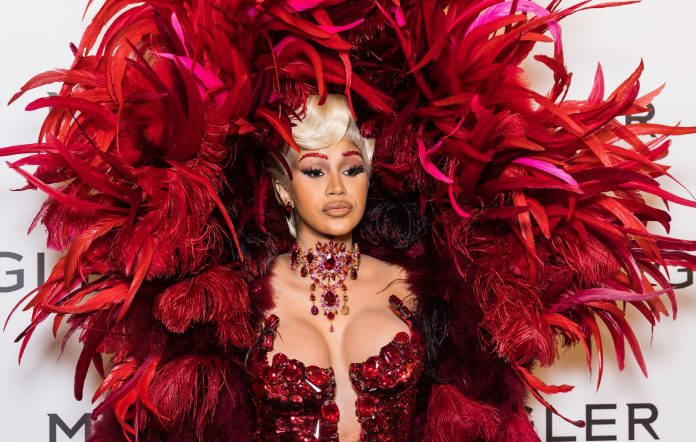 Cardi B has defended a recent trip to Paris Fashion Week after she cited concerns around travel safety in order to get a scheduled October court date pushed to next year.

The rapper was sued late last year by Kevin Brophy Jr, who alleged Cardi used his distinctive back tattoo on the cover of her 2016 debut mixtape ‘Gangsta Bitch Music, Vol. 1’ without his permission.

Last month, Cardi made a declaration to a court saying she needed to avoid risky travel, and as a result, successfully had her trial (which would require her to travel to Southern California) postponed to February 2022.

Last week, Brophy slammed the rapper for flying to Paris for a week between September 26 and October 4, calling for sanctions be placed against Cardi and the trial moved to December. A judge has not yet ruled on Brophy’s request.

As Rolling Stone reports, Cardi has hit back in a statement to a federal judge, arguing the “important” and “brief” work opportunity in Paris is not comparable to the nearly month-long stay in California that would be required for the trial. Part of her argument centres around the birth of her second child with husband Offset back early last month.

“This was the only trip I have taken since the birth of our son on September 4, 2021. I was of course very concerned with, and made thorough arrangements for, the well-being and care of our children in our absence,” Cardi – real name Belcalis Almánzar – writes.

“During our absence, our three-year-old daughter and our newborn son stayed with my mother and a baby nurse for our son, in New York. Both children were and remain in perfect health.”

Cardi goes on to say that representing famous designers’ work during her Fashion Week appearance offered a “rare” and “important” opportunity for her career, at a point when she is readying her second studio album, and has been largely unable to perform in recent years due to the coronavirus pandemic.

“That opportunity was so important and compelling to my career that I could not reasonably turn it down, provided of course that we were able to make adequate provision for the care of our children for the few days my husband and I would be gone.”

According to Rolling Stone, Cardi also argued that the Paris trip was done in coordination with a doctor, and involved multiple COVID-19 precautions to ensure the safety of her family. She added a driver remained on standby in New York for any needs that might have related to her children during that time, and that she talked to her children multiple times a day over FaceTime.

In contrast, an October trial date would have required Cardi and her family to stay in Southern California for at least three weeks.

“The children would have had to be looked after here in California, away from me for extended periods while I would be gone for trial preparation meetings, traveling to and from court, and in the courtroom all day every day during the trial,” Cardi wrote.

“I was also concerned I would be distracted and exhausted prior to and during the trial, not only from the travel and trying to juggle family needs and trial at the same time, but from lack of sleep due to my newborn’s schedule and demands.”

Cardi also rejected Brophy’s claim that her declaration on September 10 around travel safety concerns was misleading, saying that the opportunity to go to Paris didn’t arise until almost a fortnight later when the brand Mugler reiterated an invitation to represent it. She went on to attend Balenciaga and Messika events.

“My declaration of September 10th, 2021, was entirely truthful,” Cardi said. “I concealed nothing.”

Brophy filed a lawsuit against Cardi in December of last year regarding the rapper’s ‘Gangsta Bitch Music, Vol. 1’ artwork, which features a male model with Brophy’s back tattoo superimposed, ostensibly performing oral sex on Cardi.

At the time, he alleged that that the rapper had photoshopped his tattoo onto someone else’s body and used it without his permission, which ultimately appropriated his likeness in “a misleading, offensive, humiliating and provocatively sexual way”.

Cardi argued at the time that the cover image constituted transformative fair use of Brophy’s likeness. However, the judge in the trial believed the changes made to the tattoo on the cover were insufficiently creative, and the claim was not accepted as a basis for handing the rapper a win in the lawsuit at the pre-trial stage.

“Most significantly, defining elements including the tiger and snake remain virtually unchanged,” US District Court Judge Cormac Carney said at the time. “Under these circumstances, a jury will have to decide the merits of Defendants’ defense.”

Rolling Stone notes that Brophy and Cardi are set to appear for a settlement conference on December 1 in an attempt to avoid the suit going to trial.