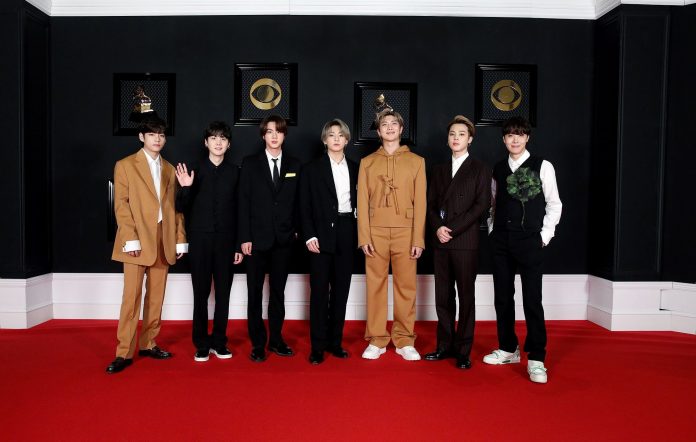 Outfits worn by K-pop boyband BTS during their appearance at the 2021 Grammys are set to be put up for auction.

The K-pop group had adorned custom-made Louis Vuitton suits as global ambassadors for the brand when they attended the 2021 Grammys that took place in March. During their appearance, the septet had also performed their popular chart-topping single ‘Butter’.

The outfits worn by BTS will be available at the upcoming MusiCares Charity Relief Auction hosted by Julien’s Auctions, and are expected to be sold between US$30,000 to US$50,000, according to WWD.

The auction, to be held on January 30 2022, will be a precursor event for the 2022 Grammys, with funds earned going towards the Recording Academy’s MusiCares initiative, which aims to provide health and other forms of assistance for those in the music industry.

Aside from the suits, the group’s rapper J-Hope will also be donating three rings he had worn during the Grammys performance, which have been estimated to go for anywhere between US$2,000 and US$4,000.

Several other musicians will also be donating items to the auction, including a long-sleeved dress embellished with white and gold rhinestones donated by Dolly Parton, who wore the piece when she was honoured as the MusiCares Person of the Year in 2019.

Katy Perry will also be putting up a silver, snowflake-like outfit for the same auction, which she had worn during a performance in 2010 as part of a concert spotlighting that year’s Grammy nominees.

Other items to be sold at the auction also include other outfits, memorabilia, signed CDs and more from Lady Gaga, Demi Lovato, Harry Styles, Machine Gun Kelly, Lionel Richie and Jason Aldean, among others.

The post BTS’ Louis Vuitton outfits from the 2021 Grammys are up for auction appeared first on NME.