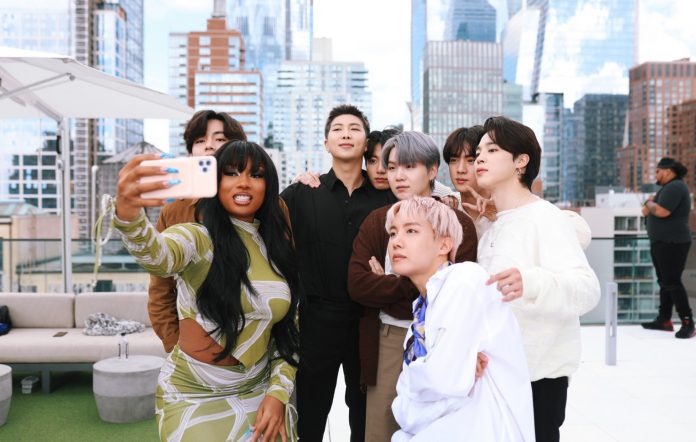 BTS have shared a clip from their New York meet-up with Megan Thee Stallion last month.

In a recent vlog uploaded onto the septet’s YouTube channel, the two acts, who had previously collaborated on a remix of BTS’ ‘Butter’, talked about the possibility of working together again. The boyband had met up with Megan Thee Stallion in September, following their appearance at the United Nations General Assembly.

“Whenever we do another song, I feel like we gotta do it big. We gotta do a video, and it’s gonna be happening,” said the American rapper, which BTS’ Jungkook responded to with excited clapping.

“After we listened to your rap recording [for the remix of ‘Butter’], everybody was so impressed and so grateful,” leader RM told the American rapper.

Elsewhere in the video, the K-pop boyband and Megan also discussed the performance video where dancers J-Hope, Jimin and Jungkook had danced to Megan’s verse in their ‘Butter’ remix.

“I was like, ‘Yeah, I wish I could do this. I wanna learn this,’” she told the group. Following a quick photo session to commemorate their meeting, the K-pop juggernauts went on to teach Megan a section of the choreography.

In other BTS news, the second season of In The Soop starring BTS is set to premiere later this week. The new trailer for the show features the group partaking in various activities, including working out, playing tennis, gaming and more.

The post BTS and Megan Thee Stallion talk about possibly doing “another song” together appeared first on NME.