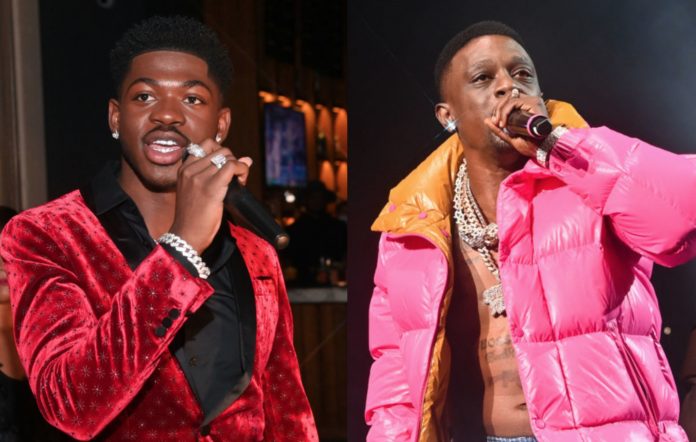 Boosie Badazz has gone on another homophobic tirade aimed at Lil Nas X, this time suggesting the ‘Old Town Road’ rapper should kill himself.

For the last few months, Boosie has been publicly voicing his dislike for Nas X’s openness with his sexuality.

Back in July, Boosie told the 22-year-old that he would “beat his ass” while using homophobic slurs against him. The video clip saw Boosie defending DaBaby‘s homophobic comments about HIV and AIDS at Rolling Loud Miami as well as calling Nas X “the most disrespectful motherfucker in the world”.

Yesterday (October 23) during an Instagram Live, Lil Nas X decided to troll Boosie by claiming he had a collaboration on the way with the Louisiana rapper, which he said was “fire”.

While the ‘Industry Baby’ artist’s fans understood it was a joke, with many of them laughing through the livestream, Boosie didn’t take kindly to rapper’s comments.

Lil Nas X said he got a song with Boosie otw pic.twitter.com/cyR9hbAwDd

In a since-deleted tweet, Boosie launched into a homophobic rant using slurs and suggesting that the star to kill himself.

“Stop trolling me f****t Lol. U a whole bitch playing with a gangsta SMH U can keep sucking dick n getting fucked n your ass n peace,” the tweet began. “N #uhateyourself I would too if I was you LOL.”

He ended the tweet, writing: “NasX if you #commitsuicide you would do this world a huge favor Nobody wants U here.” You can see a screenshot of the tweet below.

Boosie doubled down on his views with a pair of other tweets, which have since been deleted by Twitter for violating the social media platform’s rules and regulations.

Lil Nas X responded by trolling Boosie again with some misdirection, writing: “I am truly saddened. i have never been so mortified in my life. i can’t believe disney channel has yet to play halloween town this entire October.”

i am truly saddened. i have never been so mortified in my life. i can’t believe disney channel has yet to play halloween town this entire october.

Earlier this month, Lil Nas X revealed that he wants to work with SZA, Tyler, The Creator, Lady Gaga and a number of other high-profile artists.

The ‘Montero (Call Me By Your Name)’ rapper took to TikTok on October 10 to share a series of images of the artists who are on his collaboration wish list.

Meanwhile, Dolly Parton has given her stamp of approval to Lil Nas X‘s recent cover of her signature song ‘Jolene’.