Blxst Wants to Prove Why He Was ‘Chosen’ For This Moment 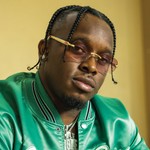 Blxst tells Billboard that the day he wrote his first Hot 100 hit, “Chosen” featuring Ty Dolla $ign & Tyga, was just “a normal day.” There were no crazy studio sessions or out-of-the-ordinary experiences that gave way to his melodic hit inside his one-bedroom apartment in Inglewood.

“I was just working,” he remembers. “It felt fun creating it. Something about it felt different. It gave a different energy as I was recording it. [Then] Ty Dolla $ign laid his verse, and it was all up from there.”

Before the song’s rise to No. 63 on the Billboard Hot 100, the West Coast polymath had no idea it would morph into an instant party-starter when piecing together his No Love Lost (Deluxe) project earlier this year.

“I definitely didn’t look at ‘Chosen’ like the single to lead with, for sure, but the fans just naturally gravitated to that one,” says Blxst. “It was a no-brainer.”

With last year’s No Love Lost, Blxst quickly emerged as a promising contender in the R&B sphere by melding sticky hooks and sleek metaphors. While West Coast rappers YG and Mozzy have previously tagged Blxst for features, new fans took notice when an East Coast legend tapped him for his services: Nas added Blxst to his balmy weekend anthem, “Brunch on Sundays,” which included NBA superstars LeBron James and Russell Westbrook in the song’s video.

“That was a big moment,” Blxst reflects. “I didn’t even know none of the people were going to be there. Of course, Nas and Hit-Boy, but when I pulled up, I seen LeBron [James], Russell Westbrook, [and] Swizz Beatz. I was like, ‘Damn. I’m really surrounded by legends.’ … LeBron actually walked up to me and said, ‘I respect what you’re doing. I see what you’re doing.’ I didn’t even know he knew who I was. That was a dope moment, for real.”

Billboard caught up with Blxst to discuss the praise he has received from Snoop Dogg and Killer Mike, his responsibility to Nipsey Hussle, his deal with Red Bull Records and more.

You once said you used to watch old videos of Ryan Leslie on YouTube when you first got started producing. What do you remember most about his creativity that you fed off?

He just opened the door. Besides being an artist, he showed me that you could be a producer, songwriter and do everything from scratch on your own. That was kind of the blueprint I took early on as an artist. Like, I wanted to be multifaceted in every aspect of creating. I still instill that today. I’m trying to make sure I’m hands-on with everything that I do.

How do you manage to stay involved on the production side, knowing that your plate is getting heavier by the day as an artist?

Snoop Dogg recently said that you have the keys to the city. Do you feel you have that extra weight on your shoulders now when it comes to carrying the west coast?

Yeah, that’s heavy, especially being this fresh in the game. The only two people I’ve seen get passed the keys were The Game and Kendrick Lamar. To be listed amongst those people lets me know I’m on the right trajectory, and I don’t take the craft for granted. I want to do it the right way and carry the torch in a respectable way and to represent my city in the right way.

Killer Mike also gave you your flowers on your tour stop in Atlanta. What do these co-signs from legendary rappers mean for your confidence?

Man, I think it’s dope to connect with the OGs. It’s like we’re bridging the gap at the same time, from when I do my shows with the young kids all the way to the grandmas who appreciate my art. Just to have the ability [to do that] is so dope. I can connect with so many people across the world and I don’t take that for granted.

Who do you prefer most: Blxst the singer, Blxst the rapper, or Blxst the producer?

That’s a good question. First and foremost, I love melodies, so I’d go with Blxst the singer first. Then, Blxst the rapper second, because I like to talk my s–t sometimes.

One of my favorite records from you is “Forever Humble.” How have you managed to stay humble throughout this all-star year you’re having?

My mom is actually a mental health counselor, so having her as a resource has been very helpful so far. I just try to stay in communication with her and be as transparent as possible just so I can get certain things off my chest. She always gives me good advice, so I’m pretty good.

I spoke to Mozzy at his album release party a couple of weeks ago and I said that you and him need to do a project together. What are the chances of that happening?

Me and Mozzy definitely haven’t missed. We got a couple in the cut. Right now, I feel like I’m still fresh in people’s minds. I wanna be able to establish myself as an individual artist and then it’ll make that project that much more worthy of listening to because Mozzy got like over 100 projects in the game. His workflow is crazy, so I gotta at least put out 60 projects. Nah, I’m just playing (laughs).

You said in an interview with XXL that you want to maintain the legacy that Nipsey Hussle instilled. What is that legacy to you, and how do you plan to maintain it?

Aside from music, I would just say building within the community. I think that’s the most important thing: not forgetting where you come from, and making home that much better for other people. I think it’s cool what Mustard is doing. He just wants to make life easier for people, and I think about that too: how can I make other people’s lives easier? Whether that be buying property or giving people jobs, I feel like that was the blueprint from Nipsey.

You recently re-signed with Red Bull Records. Why did you decide to stay there and continuing building with them as opposed to signing to a major label?

Red Bull [Records] understood the vision from the jump. It’s like a family situation. It’s a small team, but they go hard. Me being signed to myself through my Evgle team, it’s the perfect match. I couldn’t see me doing it any other way.

A version of this story originally appeared in the Oct. 23, 2021, issue of Billboard.