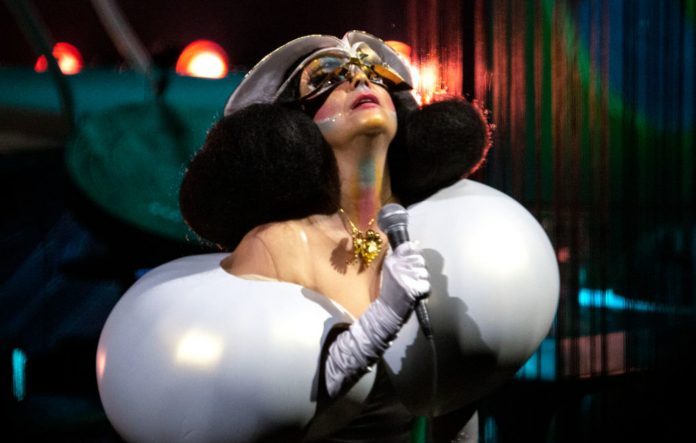 Björk has announced that she’ll be bringing her immersive theatrical tour ‘Cornucopia’ to Los Angeles next year for a trio of dates.

‘Cornucopia’ is based on the singer’s 2017 album ‘Utopia’ and is her first official theatrical concert tour. It’s directed by Argentine filmmaker Lucrecia Martel, with designer Chiara Stevenson’s stage designed to resemble fungi.

The newly announced shows are scheduled for early 2022 at the Shrine Auditorium in Los Angeles on January 26, 29 and February 1. Tickets go on sale next Friday (October 15) at 10:00am – you can get them here.

The first ‘Cornucopia’ shows came in May, 2019, with an eight-night residency at New York venue The Shed. The 19-song setlist in New York included the first time Bjork had performed her songs ‘Venus As A Boy’, ‘Hidden Place’ and ‘Show Me Forgiveness’ for over a decade.

The show features a 50-piece Icelandic ensemble The Hamrahild Choir, a seven-piece flute band, a harp and several instruments specially designed for the tour. The show also features a speech by climate activist Greta Thunberg, which is shown on a video screen before the encore. Costumes for the tour were designed by fashion chain Balmain.

In November 2019, Björk brought her ‘Cornucopia’ tour to London, with a show at The O2. In a four-star review, NME‘s Emily Mackay said: “‘Thank you for tonight, London,’ she says as she closes the post-Greta encore with a delightfully ravey version of ‘Notget’. ‘You’re my second home, I’m so grateful for the musical upbringing you gave me.’

“We in turn should be thankful for an artist wild enough to take a show this audacious to a venue in which she’ll be followed, over the next two nights, by the more straightforwardly people-pleasing performances of McFly and Little Mix. This is a time where we all need to push it, to find new ways of being: like the lady herself sings in the show’s penultimate track: “Imagine a future and be in it.”

Meanwhile, Björk has announced new dates for her livestreamed orchestral shows, following multiple delays due to the coronavirus pandemic.

The Orkestral series will see the musician perform with different collaborators over each of the four dates, including members of the Icelandic Symphony Orchestra, Flute Septet Viibra and Hamrahlíð Choir.

The gigs, performed at Reykjavik’s Harpa Hall to a live audience and livestreamed to fans worldwide, were first due to take place in August 2020, but have been delayed multiple times.