HomeNewsBill Maher to ‘Nevermind’ baby Spencer Elden: “Stop being such a fucking...
News

Bill Maher to ‘Nevermind’ baby Spencer Elden: “Stop being such a fucking baby” 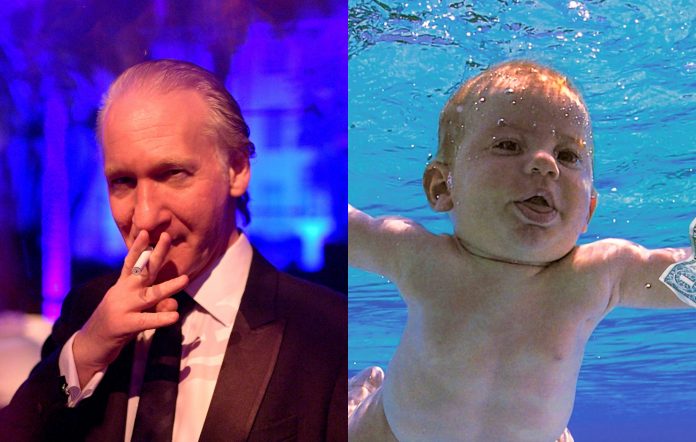 Actor and comedian Bill Maher has weighed in on the ongoing lawsuit between Nirvana and the star of the band’s iconic ‘Nevermind’ cover.

Earlier this year, Spencer Elden – the child who appears in the artwork – sued the surviving members of Nirvana and Kurt Cobain’s estate, alleging the image was an example of child pornography and sexual exploitation.

Maher hit out an Elden in a recent episode of his HBO talk show Real Time, delivering a monologue where he opined that “the words ‘victim’ and ‘survivor’ have travelled a long way from their original usage”.

“The baby from the Nirvana album says he’s a victim,” Maher continues. “He’s suing Nirvana for lifelong damages. I never thought I’d have to say this to a baby, but stop being such a fucking baby. You’re not a victim. There’s no reason you can’t have a normal, happy life just because people look at you and think, ‘baby penis’. It didn’t hurt Trump.”

Take a look at the full segment from Real Time With Bill Maher below (the section addressing Elden begins at 3:45):

Despite Elden’s lawsuit, which claims he “has suffered and will continue to suffer lifelong damages” from his appearance on the ‘Nevermind’ cover, Nirvana recently announced a deluxe reissue of the album in commemoration of its 30th anniversary. The record is set to be released on November 12, and features Elden’s image uncensored.

Prior to its announcement, Elden expressed that he wanted the ‘Nevermind’ artwork altered for any future re-releases. “If there is a 30th anniversary re-release, [Elden] wants for the entire world not to see his genitals,” his lawyer, Maggie Mabie, told The Associated Press.

Dave Grohl discussed the lawsuit last week, saying in a new interview: “I don’t know that I can speak on it because I haven’t spent too much time thinking about it. I feel the same way most people do in that I have to disagree. That’s all I’ll say.”

The drummer (and current Foo Fighters leader) had previously hinted that Nirvana could indeed change the album’s artwork in the future, saying he had “many ideas of how [Nirvana] should alter that cover”.

The post Bill Maher to ‘Nevermind’ baby Spencer Elden: “Stop being such a fucking baby” appeared first on NME.