HomeNewsBiffy Clyro’s Simon Neil hails Yungblud: “If I was 15, I’d be...
News

Biffy Clyro’s Simon Neil hails Yungblud: “If I was 15, I’d be dying my hair pink’ 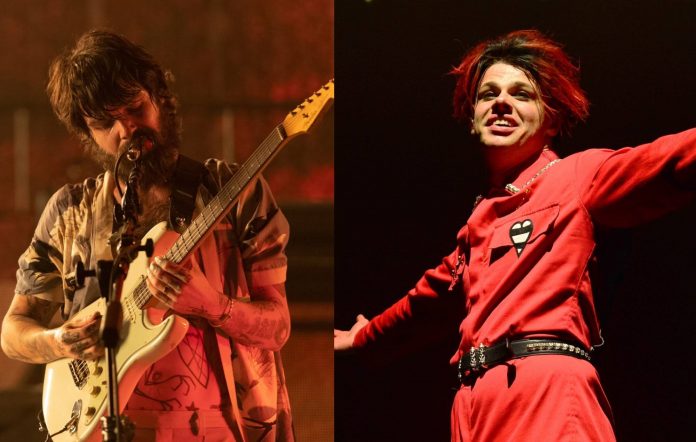 Biffy Clyro frontman Simon Neil has praised Yungblud and said that he admires “him a lot”.

The Scottish trio were recently supported by the Doncaster punk star at Glasgow Green and Neil said they were quite taken by him in a new interview with NME.

“I love seeing anyone who’s inspired by rock and metal making their way in the mainstream,” he said. “There’s an era of your teenage years where you should be like, ‘I’m not doing what everyone else is fucking doing or what my parents tell me’.

“If I was 15 I would be all-in on Yungblud. I’d be dying my hair pink, wearing a miniskirt, the lot. When I look back to Kurt Cobain, he was wearing dresses and make-up and nail varnish. It’s important that every teenage generation does something that makes everyone older go, ‘What the fuck are you doing?’ It’s like, ‘This isn’t for you!’ That’s the whole point! I admire him a lot.”

Neil also spoke about Biffy’s recent album ‘The Myth Of The Happily Ever After’, and said COVID forced them to rewrite many of the songs they already had, creating a whole new beast.

“The liberation of doing anything that you had any control over last year was a thrill in itself,” Neil added. “We couldn’t leave the house, we couldn’t go shopping, no one could see anyone they cared about so the only freedom we had was in these ideas and these songs.”

The album was awarded four stars by NME and was described “as a happy accident”. The review added: “What started out as leftovers from the Scottish rockers’ last record has turned out to be, ironically, perhaps their most cohesive album to date.”

Meanwhile, the band are due to hit the road for their intimate ‘Fingers Crossed’ UK tour at Liverpool University tomorrow (October 29) with Bob Vylan.

Further dates include London, Cambridge, Sheffield and Southampton before the tour wraps up at Bristol O2 Academy on November 4.

The post Biffy Clyro’s Simon Neil hails Yungblud: “If I was 15, I’d be dying my hair pink’ appeared first on NME.