HomeMusicBEARTOOTH & WAGE WAR Bring The Below Tour to Minnesota
Music 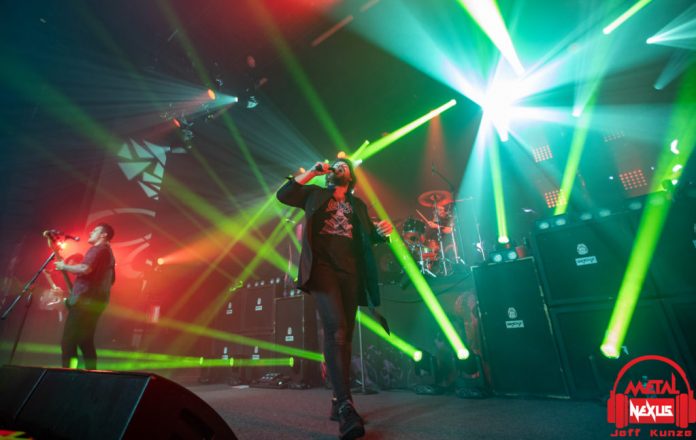 Beartooth brought the highly anticipated ‘The Below Tour’ to The Fillmore Minneapolis in Minneapolis, Minnesota. The tour also featured Wage War in support. Dragged Under, who is also featured on this run, was unable to perform as they have momentarily stepped away from the tour for safety reason and hope to rejoin it in the near future. It was a packed house and you could feel the anticipation building as fans counted down the minutes until the lights went out.

Coming to the stage to a tremendous roar from the crowd, the band hailing from Ocala, Florida, was Wage War. Knowing the energy the headliner would bring, they were determined from the opening note not to be outdone. Opening with “Stitch” and then into “Who I am” the onslaught was on. The crowed returned that energy as a circle pit was quickly put into motion. Vocalist Briton Bond paced the stage as he ignited the fans to give the band everything they had. Flanking the singer were guitarist Seth Blake and Cody Quistad. The rhythm section consisted of bassist Chris Gaylord and drummer Stephen Kluesene. Two of the highlights from the set were the tracks “High Horse” and newly released single “Circle The Drain.” Both songs are featured on the upcoming album release, ‘Manic’, that will be dropped on October 1, 2021. Powering through a blistering set consisting of ten cuts, the band said goodnight with the closer “Low.” This was my first-time catching Wage War live and they were impressive, I look forward to hearing the new record and hope to catch them again real soon.

With the intermission over, the lights dropped to the sound of ‘Break Stuff” by Limp Bizkit blaring through the sound system of The Fillmore. What came next was nothing short of a purple tidal wave that engulfed the room with a sonic audio assault that could that hardly be contained by the walls that held the venue together. The energy in the room took over and that circle pit Wage War started earlier, was now twice as big and moving to the intensity of the music. Beartooth was now in command as they ripped into the opener “Below” and then “Devastation.” Not to be outdone by the sheer aggression of the sound, the lightshow coming off the stage was just as tenacious as the music was. It cut through the smoke with precision and at times you could barely see the stage.

Beartooth mastermind and vocalist Caleb Shomo took advantage of every second he had on that stage. He was non-stop movement as he ran from side to side igniting the crowd, that quite frankly, didn’t need any more inspiration to fully throw themselves into Shomo’s world. The fans were all in, singing every word as the crowd surfers made a steady stream to the stage. It didn’t matter what they played as Beartooth maneuvered through a set that included songs from all the releases. Songs from ‘Disgusting’ included “Body Bag,” “In Between,” “Beaten In Lips” and “In Between.” Tunes from the album ‘Aggressive” were “Hated” and “Sick Of Me.” Three songs from ‘Disease’ included the title track, “You Never Know” and “Bad Listener,” but tonight the celebration revolved around the fantastic 2021 release simply called ‘Below.’ Eight songs anchored the set highlighted by “Hell of It,” “Fed Up” and “The Past Is Dead.” The guys that were asked to deliver the musical goods were completely on task. Guitarists Zach Houston and Will Deely along with bassist Oshie Bichar and drummer Connor Denis provided the soundscape that powered the engine that brought the songs alive. As the night went on the crowd never let up, the pit just kept spinning and heat and humidity in the building built up to the point where the ceiling was dripping moisture. The brilliant night of music ended as they closed the show with “The Last Riff.”

The biggest take away from seeing Beartooth for the first time wasn’t the explosive energy of the band or the blistering aggressiveness of the music that pulverized everything within earshot, and it wasn’t the bombastic light show that worked in unison with the music. All those things were impressive that made for an awesome concert. That thing that stuck with me was that connection between Beartooth and the people that jammed into that venue to see them. That connection is real, it’s something that can’t be manufactured, all those people screaming those lyrics and locking into every movement and word that came off that stage wasn’t lost on Shomo. He was so appreciative of those fans and just being on stage again. He, and the rest of the band, gave everything they had because every moment counts. We have learned over the past year that this can be taken away instantly. Let’s hope we get more moments like this in our futures.