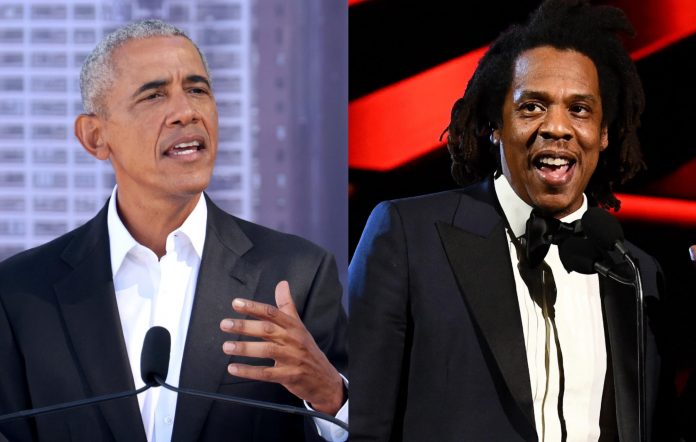 Barack Obama helped induct Jay-Z into the Rock & Roll Hall of Fame last night (October 30) and gave a speech about the rapper’s influence on him.

The former US president installed him as the latest rap star to receive the honour, who joins previous hip-hop inductees including The Notorious B.I.G., Tupac, N.W.A. and Public Enemy.

Obama said in a speech: “I’ve turned to Jay-Z’s words at different points in my life, whether I was brushing dirt off my shoulder on the campaign trail, or sampling his lyrics on the Edmund Pettus Bridge on the 50th anniversary of the Selma march to Montgomery.

“Today, Jay-Z is one of the most renowned artists in history and an embodiment of the American dream, a dream he has helped make real for other young people like him.”

After his speech a video montage was shown featuring Beyoncé, Rihanna, Chris Rock, David Letterman, Queen Latifah, Lin-Manuel Miranda, Diddy and Jamie Foxx all reciting some of Jay-Z’s most memorable lyrics. It closed with the rapper and Beyoncé’s eldest daughter, Blue Ivy, quoting the lyrics to ‘Ride Or Die’.

Comedian Dave Chappelle introduced Jay-Z to the stage. “It is an incredible honour to induct this next man into the Rock & Roll Hall of Fame,” he said. “But I need everybody in rock ‘n’ roll to know, that even though you are honouring him, he is ours. He is hip-hop. For ever and ever, and a day.”

In his acceptance speech Jay-Z gave shout outs to his mother, Gloria Carter, and Roc-A-Fella Records co-founder, Dame Dash. “Shout out to Dame…I know we don’t see eye to eye, but I can never erase your accomplishments, and I appreciate you and thank you for that,” he said.

Elsewhere at last night’s ceremony, Taylor Swift paid tribute to Carole King with a live performance of the iconic singer-songwriter’s track ‘Will You Love Me Tomorrow?’