Bad Bunny, Karol G & More: Which Latin Artist Would You Trick-or-Treat With on Halloween? Vote! 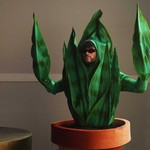 Halloween is almost here, and Billboard wants to know: Which Latin artist would you like to trick-or-treat with if you had the chance?

The fan-focused poll includes 26 artists who are currently charting in Billboard’s top 25 on the Hot Latin Songs chart, such as Farruko, whose “Pepas” is at No. 1 for a 10th consecutive week, and Bad Bunny, who has four titles in the top 25, including “Dakiti” and “Yonaguni.”

Also on the list are Christian Nodal, Karol G and Aventura (especially Romeo Santos), who never fail to impress with their festive costumes, and J Balvin and Sech, who last year released their spooky perreo “La Luz.”

With the holiday just around the corner, vote for which Latin artist you’d like to hit the streets with for some candy, below.