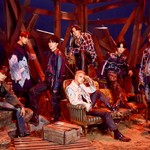 “We would like to thank the fans who always cherish and support ATEEZ,” the statement begins. “Previously, we have made several announcements about fan club etiquette and prohibiting fans from visiting artists during their private scheduled activities and in private spaces, but incidents of invasion of privacy via unlawful means have continued to take place.

“Moreover, behaviors that cross the line, such as following artists to their private activities and private areas simply for their own benefit despite the staff’s attempts to stop them, have obstructed the company’s business and caused the artists to go through psychological suffering,” the statement continues. “The company discovered that someone had attached a location tracking device to the artist’s work vehicle and illegally collected information about their location. We have spoken to the local police station, who are now tracking down the culprit, and there will be no leniency or negotiation regarding the punishment.”

KQ Entertainment concluded the statement by promising to take the necessary precautions to ensure ATEEZ’s safety, adding that fans who violate said safety will “be excluded from all fan participation and activities without prior notice.”

ATEEZ most recently released their Zero: Fever Part.3 EP in September. That same month, the K-pop group topped Billboard’s Emerging Artists chart and has spent 48 weeks on the chart.