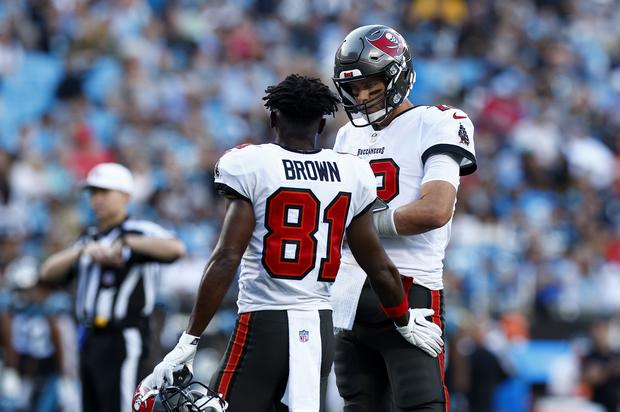 Antonio Brown has gone back and forth when it comes to Tom Brady. Throughout the years, Brown has praised Brady but he also disparaged him. Sometimes, it feels like AB hasn’t truly figured out how he feels about Brady, and it has led to some very conflicting opinions over the years.

For instance, Brown took to Twitter today with some harsh words for the Tampa Bay Buccaneers quarterback. As many of you already know, Brady is taking some time off to focus on his family, and AB seems upset by it. In the tweet down below, Brown wrote “Tom brady manipulate the game gets 14 days go home get his mind rt lol. Now u see the difference. Put that Shit on.”

This is likely in reference to the fact that Brady got some time off when he needed it, but Brown was not given the same treatment when he had an ankle injury last season. Of course, this eventually led to his on-field tantrum where he took off all of his gear and left the field.

Brown then went on to take a swipe at Brady’s trainer Alex Guerrero. AB got the name wrong, but it’s clear who he was talking about. “Alex Guerra You think i won’t have u smacked at TB12 boy stop playing with me! Boy getting paid by bucks n taking players money too.”

Needless to say, there is never a dull moment in AB’s world. Stay tuned to HNHH for more news and updates from around the football world.