HomeMusicAmine Is Back Outside and New Project ‘TWOPOINTFIVE’ Is Proof
Music

Amine Is Back Outside and New Project ‘TWOPOINTFIVE’ Is Proof 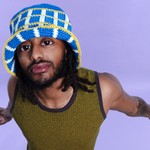 Since the release of his sophomore album Limbo, Aminé has been in a different bag.

The Portland rapper is high off what he calls his new EP/LP/mixtape/album TWOPOINTFIVE. The second in the POINTFIVE series following 2018’s ONEPOINTFIVE, the 12-song in-betweener project finds the 27-year-old stretching his vocals over more upbeat tempos — becoming his most experimental offering to date.

“We might change up the sonics every album with the beats and the production,” Aminé explains over Zoom from his house in L.A. “I tried to experiment with my voice but also keep it me, and give these elements that sort of still feel like myself.”

Born Adam Aminé Daniel, Aminé rose to fame in 2016 after the release of his playful single, “Caroline.” The song peaked at No. 11 on the Billboard Hot 100 chart, and was followed by his debut Republic Records-released album Good For You in 2017, both of which gave the world a sense of his colorful and cheery aesthetic.

However, last year saw a more pensive Aminé. In August 2020, amidst the pandemic and on the heels of the Black Lives Matter movement’s resurgence following the police murder of George Floyd, Aminé dropped his (unfortunately) appropriately titled second album, Limbo. Exploring race and his personal coming-of-age growing pains, the Ethiopian-American artist acknowledges the title as a mere coincidence that worked in his favor: “I had [the title] for about a year and a half — way before this pandemic, before everything,” he told Vulture last year.

Now, the “basically independent” artist is unraveling a new layer of his artistry with TWOPOINTFIVE, and having fun while doing so. He’s back outside with his new Goldendoodle Oliver the Menace, taking trips with his friends and flexing his wealth, as he should. (“Hundred thousand flights/ Pockets looking like they bricks, huh/ Said she couldn’t find me so a n—a put his wrist up,” he raps on “Twisted!”)

Billboard caught up with Aminé to discuss constructing TWOPOINTFIVE, reuniting with Rickey Thompson and staying true to himself amidst experimentation.

How long after releasing Limbo did you decide you were gonna do another POINTFIVE project?

It took a while, honestly. I think around my birthday, April 18th, is when I started to think about just a project, in general because I was making a lot of this new music. I’ve had “Charmander” for a while, I had “Neo” for a while, and I was excited about all this new music. So I was just like, ‘Yeah, I just want to give a new project for people to have.’ More so like a tape, you know?

I know on Apple Music, it says Limbo was released via CLBN/Republic Records, but what about this one? What is your label situation?

I can. My thing is… I’m basically independent. But I’m also not the kind of guy to announce, “Hey, y’all. I’m independent!” I don’t like to use that as part of my marketing. You know what I mean? I just let the music speak for itself and let the music do what it does. Growing up when I was listening to my favorite artists, I was not focused on what label or if they were independent or not. [Laughs.] It’s so funny to me how that is people’s thought process now with music. And I purposely keep that to the side.

You have ONEPOINTFIVE and now TWOPOINTFIVE, and these are your in-betweener projects. How do you make sure these records aren’t devalued as they exist between your studio albums?

I just don’t think about that. The ONEPOINTFIVE, TWOPOINTFIVE series is just so near-and-dear to my heart and my fans, and it’s just something I really, really love doing. There’d truly like, laughter and joy in the studio when we make these projects. So for me, these are just my creative freedom projects in between my albums. These are really fun to make, and I value them the same.

What inspired these faster tempos? Do you feel like the pace of this project reflects your life in any way?

Yeah, I think it reflects my life, especially after 2020. Life was really slow and really hard to get adjusted to, for me, in 2020. So as soon as I could go back outside and I could do regular things again — be with my friends or ride my bike and just be outside as much as I used to — it felt like my life was getting a lot more fast-paced. And that’s not the reason the music became so fast-paced, but I just wanted to make music that I wanted to be outside listening to.

I didn’t really want to make anything too introspective and sad with this project. This was more for me to really have fun and dance, and have a really good time. And when we do these shows, I just can’t wait to see the fans going crazy to it. It’s going to be really fun.

I feel like even though you’re experimenting, it doesn’t sound too out of place given your artistry. It still sounds natural.

We might change up the sonics every album with the beats and the production. But I tried to experiment with my voice but also keep it me and give these elements that sort of still feel like myself. I have songs that didn’t make TWOPOINTFIVE that were a little too far off for me, and I knew that in the back of my mind. I just tried to make sure I’m not falling off the cliff and losing my true self by making these songs.

I know you credit yourself, Pasqué, Lido and Westen Weiss as executive producers. Are there any songs you produced solely by yourself?

Um, no. We were actually all in a studio together: me, Pasqué, Lido and Westen Weiss. This is first time I’ve ever had this many producers involved so thoroughly. Usually I take beats from multiple people, and then me and Pasqué figure it out. But for this, I just kinda have this friendship with Westen Weiss, Lido and Pasqué.

I don’t know, we’d take shrooms together every week. [Laughs.] We’d have a really, really good time in the studio making these songs, and we genuinely were dancing like little kids in their bedroom when we made these. So the production was all of these guys, and they killed it. I helped a little here and there, but it was not only me.

Walk me through a typical day recording and producing this project.

So half of this project was recorded at my house, and then the other half was mainly recorded at Gold Diggers Studio in Hollywood. It’s a really cool studio, really nice people, and basically there’s no parking — so I would start my day off like eating breakfast, and then Ubering over there, ’cause I didn’t want to drive. And then we’d be there from like 2:00 p.m. to like 3:00 a.m., organizing songs and the production.

There’s like a million versions of these songs. We tried different beats for “Sh!t2Luz,” we tried a different verse for “meant2b.” There was a couple of features that was supposed to be on some songs, but some fell through and some didn’t work out, and some just didn’t fit the sound. That’s when I decided, maybe no features at all — I’ve never done that before. So yeah, typical day is pretty boring for me.

We also hear Rickey Thompson throughout the project. I know you two are pretty good friends but I’m curious, do you let him freestyle his skits or do you give him a script?

He came into the studio and I told him I’m working on TWOPOINTFIVE, and he was hype. I just gave him the subject matter to these songs… and he was like, “Ok, cool.” And he walked in the studio, heard the piano part for the first time, and that’s what he did. That was his first take that you hear on the album. There’s no script, no nothing — like, he is genuinely that talented. He’s so good at these skits, it makes me so happy hearing him do them. I was like geeking out in the studio.

On the Daebak Show with Eric Nam you said, “I record the best music when I’m living my life.” What are some ways you protect your energy and peace so that you can live your best life?

I feel like as soon as I’m getting really stressed out, I like to FaceTime my parents and talk about anything other than myself, you know what I mean? And just hearing them talk and tell me stories about funny things that happen at church or something. I love that. Family distraction is so great for me because it just puts me out of my own world, and it puts me into someone else’s. I think it’s good for my mental health.

Walking my dog and going on trips with my friends. I hit ‘em up right away, so we can hang out and have dinner or meet up. And that kind of relationship where we’re not afraid to hang out whenever and wherever is something I cherish. I think that’s something that keeps me really happy and keeps me outside of thinking about my music all the time.

What’s your favorite song on the project and which are you most excited to perform now that it’s out?

That changes every day. I think right now my favorite song might be “Mad Funny Freestyle,” because it’s just mad funny. [Laughs.] I love that song, and it was made in one night, and it felt really good. I still have a video on my phone I haven’t posted, but the night we made it I played it out loud on the speaker and we just danced to it. It felt good.

I think I’m most excited to perform “Neo” or “Mad Funny” ’cause I know those are the type of songs that people [would] bounce to. I’m excited to see that.

Have you learned anything new about your abilities as an artist while creating these new sounds and if so, what has this experience taught you?

It’s taught me to not take myself too seriously when making music. I think when you’re coming into making music as a rookie, you’re like, “This needs to be like that, and I need to have the best intro song ever and the best single. And then the best outro and then the best sad song and the best…” Like, it’s so much pressure trying to create a perfect album. And I realized I make better music when I’m not thinking about anything other than just the music.

I realized that sounding dumb on a song is good, you know what I mean? Like, experimenting with my voice — because there are a lot of these weird voices and quirky lines that I do on TWOPOINTFIVE that I had never done before, and I really, really am proud of those because those are outside of my norm. And that’s what success is to me with music — where I can make something that’s good, but something that I’ve never done before. And if I can keep doing that, then I’ll keep making music. If I can’t keep doing that, then I’m just going to be depressed and not want to make music.