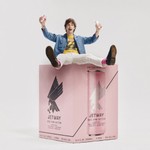 Ahead of a headlining set with The Strokes at San Francisco’s Outside Lands this coming weekend (Oct. 29-31), vocalist-guitarist Albert Hammond Jr. has revealed a new venture in JETWAY, a “naturally uplifting” wine seltzer.

When recalling the product’s inspiration, Hammond Jr. is transported back to 2018 when he had just landed after a transatlantic flight and got “swept away by the Italian culture.” He says: “My friend, an Italian actor named Francesco Mandelli, took me to his local haunt and we chatted the night away with his friends drinking aperol spritz, something of an unknown beverage to me at the time.”

“Months later at the Monaco Formula 1, I saw the drink take shape,” Hammond Jr. continues. “I wanted something that could be with me all day, something refreshing and sociable. A mixture of the night I had experienced in Milan, the day adventure I was on in Monaco and all the travel and celebration that came with those experiences.”

Hammond Jr. spent the next three years testing flavors and figuring out how to launch the business, though says it wasn’t until he met his partner in JETWAY, COO Ben Parsons, that the venture started to take shape. Now, he says, he’s “blown away” at the family they’ve built around this brand — and is eager to meet new fans at Outside Lands’ Winelands this weekend, where JETWAY will be widely available for the first time after its first official pour at The Strokes’ Forum show in Los Angeles this Tuesday (Oct. 27).

Investors in JETWAY include Joaquin Phoenix, Rooney Mara, Nick Hoult, Coran Capshaw, Robert Schwartzman and Zoey Grossman. With the product finally launching, Capshaw says, “It’s exciting to see Jetway come together on all fronts — from strong feedback on the product, the packaging and the great team behind it.”

Beginning in October, JETWAY — which contains no cane sugar or artificial flavors and is available in a sauvignon blanc and rosé — will be available in stores and restaurants in Southern California beginning this month with distribution continuing to expand throughout the rest of 2021 and into 2022.

The Strokes are managed by Capshaw’s Red Light Management and booked by Marsha Vlasic at Artist Group International.